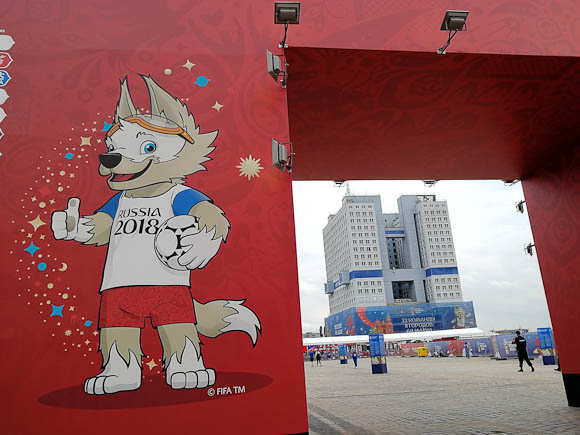 Poland is right next door to the Russian exclave of Kaliningrad, so when I heard that Russia were hosting a bit of a football tournament, and that some of the games would be in Kaliningrad, I thought I’d drop by.

I’m not as big into football as I used to be. And maybe that’s a good thing – it used to have the ability to put me on a high or low for days afterwards. Frankly, I quite like the emotional stability that comes with giving less of a shit about something over which I have little or no control.

But as well as that, I’ve learnt that one of the best things you can do in life is be part of big events. At one time, I used to avoid such things – going where all the action was going to be always seemed expensive, stressful and full of hassle. But what really changed my mind was going to Colombian festivals, which were by fan and away the things which made the biggest impression on me during my time there.

Such events might not suit everybody (e.g. introverts and some people with anxiety disorders) but I now see them as one of the best things about travel, and one of life’s great highlights in general.

I actually applied to see my own team – England – play there against Belgium, but didn’t get awarded ticket for that (I applied during the lottery phase of ticket allocation). I did however get a ticket for the Croatia-Nigeria game.

I wasn’t too bothered about missing out on seeing England given the trouble between England and Russia fans during Euro 2016 in France. In fact, if I’m honest I was still a little bit concerned about going. Official voices were basically saying via the media ‘be careful, especially if you’re on your own in one of the more remote parts’. Which was my exact scenario, of course. But I went along anyway, on the basis that things are often very different when you’re on the ground.

It probably helped that I don’t own an England shirt, so people wouldn’t know exactly where I was from unless they asked me (or tried to jump a queue that I was in), but I never had any negative comments due to my provenance. Indeed, pretty much everyone I conversed with was incredibly friendly, and Russians started conversations with me on numerous occasions. I got the impression that many of the inhabitants of Kaliningrad had never seen anything quite like it in their home city, and were loving every minute of it.

Anyway, I could prattle on all day about this. On to the videos…

Here are the four videos I made, filmed and edited entirely on my smartphone, on location in Kaliningrad.

How I (and others) got to Kaliningrad, and what my first impressions were.

Watching games in the fan zone, the famous/infamous/totally-unheard-of-before House of Soviets, and exploring what the city of Kaliningrad has to offer.

The big match! Croatia (eventual runners-up) take on Nigeria in Kaliningrad’s newly-built Arena Baltika in the game which is the whole reason I’m there. Plus how friendly are the people of Kaliningrad, Russia? And what is the atmosphere like? Oh and a visit to the Museum of the World Ocean.

Trying (failing) to take a break from the football in a seaside spa town. And my closing thoughts on Kaliningrad and my experience of Russia during the 2018 World Cup.