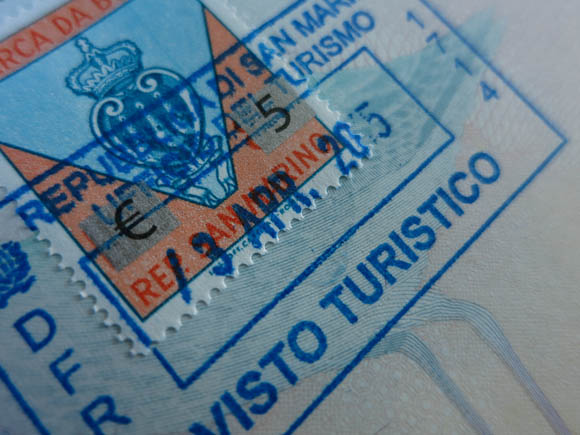 At the tourist office in San Marino – the tiny enclave within Italy – you can get a tourist stamp in your passport for €5. But is it really worth it?

Certainly, most tourists won’t need anything extra in their passports – San Marino has an open border with Italy, so if you’ve got as far as the tourist office atop Monte Titano then you’re probably allowed to be there anyway. But that doesn’t stop people queuing up to get them.

More on how you do that further down.

Should you pay for a stamp you don’t need?

I really wasn’t sure if I should get one myself.

My accommodation was at the bottom of Monte Titano and the tourist office was at the top. I’d already spent the entire previous day up there and, in tourist terms at least, there’s not much to see in San Marino that requires a second day. Could I really be bothered walking all the way back up to the town of Borgo Maggiore (at the foot of Monte Titano), taking the cable car up, and then paying €5 for the stamp itself, all when I didn’t need it in the first place?

In short, is it worth paying for a passport stamp you don’t need?

The value of a stamp

The point of a passport is to act as a means of certified identification when travelling. But, as you travel round the world, you can certainly get attached to the stamps and visas you collect along the way.

A heavily-stamped passport can make you feel like a proper bona fide world explorer, even if in reality you’re actually just an over-privileged seer-of-foreign-stuff (like me).

I’d like to say that I’m immune to this but I’m not. There have certainly been plenty of times when I’ve sat there and thumbed through my own tick book – I mean passport – with a sense of pride. There’s something really cool about going through all the exotic stamps, trying to decide which one makes you feel the most smug and self-satisfied. And when you arrive somewhere you expect to get a stamp, and you don’t, it can almost be annoying.

It was when my passport was lost/stolen in Colombia that I really noticed it (something you can read more about in Dancing Feat: One Man’s Mission to Dance Like a Colombian). The cost and inconvenience were both pretty considerable, but worse than that was the loss of all those sentimental ink marks and stickers. I was surprised how much it bothered me.

So yes, these stamps do mean something.

On the downside, it’s 5 Euros. Plus (at least in my case) a big schlep up a hillside, and a cable-car journey. 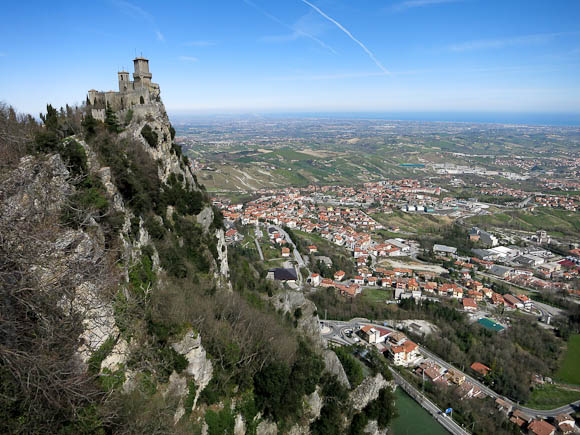 However, getting this stamp reminds me a bit of the thing of getting ‘souvenir stamps’ in general, such as the novelty ones you can get at Mitad del Mundo (the equator marker point) in Ecuador, or at ‘The End of the World’ in Ushuaia, Argentina. Isn’t it just a bit frivolous?

The wisdom of putting unofficial stamps in your passport is another issue, but if you’re hell-bent on filling your passport as quickly as possible, then it might make some sense. Though you could also argue that doing so by filling your passport with unnecessary stamps somewhat lessens the achievement. I mean, why not just make your own stamps, carved out of potatoes, if you’re really so desperate?

How to get it done

Still, if you’ve decided you want to get it done, it’s easy enough. Go to tourist information centre, right by the cable-car station, with your passport, five euros (at the time of writing) and a bemused expression. It’s pretty popular and you may have to queue.

You say, “Here’s my passport and five euros.”

They say, “Here’s your passport back with a stamp you don’t need in it.”

And everyone’s happy, if slightly more cynical about the world.

Did I get it done?

It seemed a bit silly and frivolous, not to mention a waste of money. But then I thought ‘I could write a short and pointless blog post about that’.

Also I realised it meant I could take lunch at the precipitous La Capanna restaurant, with its amazing view out over the Adriatic Sea.

So that’s what I did. 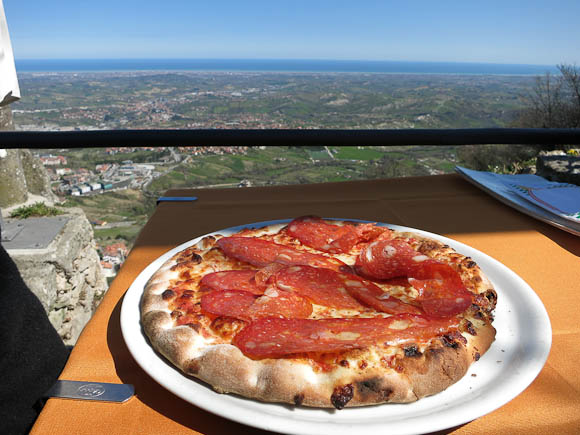 Have you ever got an unnecessary stamp in your passport? Would you pay for it?  It’s a long shot, but have you ever eaten pizza in a restaurant with a good view as a partial reward for paying money for a passport stamp you didn’t need?

[NB This post was amended in Jan 2018 to make it clearer that it’s merely a passport stamp, and not an actual visa granting visiting rights]