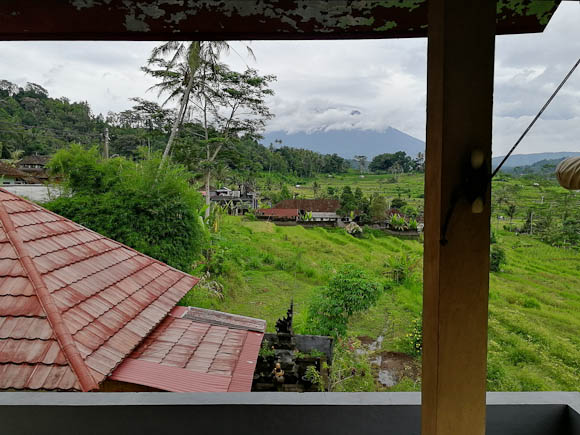 Why I Left the Perfect Writers’ Retreat

When I’m cooped up in a city centre I often yearn to go to place out in the wilds to get some work done. It’s especially the case when I’m a on particularly unproductive run.

It seems like a panacea. If only I was in some rough-hewn log cabin in Poland’s Tatra mountains I could probably bash out a book in a week. Maybe two books, even.

Yet when I finally did get to that kind of place, I found it didn’t work for me the way I expected.

I happened on the perfect (or rather ‘perfect’) writer’s retreat almost by accident while in Bali, Indonesia. A friend I’d made on Indonesia’s Gili islands had recommended Sidemen (pronounced ‘SEE-deh-men’, and sometimes also spelt Sideman) to me, and it probably only stuck because of the weird name.

View to a hill

I booked a room in a guest house in advance, without really knowing what I would find. But when I got there I found that I’d booked a place with one of the best views I’ve ever experienced from a place I’ve been staying. And all for just 210,000 Indonesian Rupiah per night (about 12 pounds sterling, 13 euros or 15 US dollars).

Here’s the view from the balcony.

The room itself was slightly curious, with the bed pressed against a ‘floating’ wall which you could pass round either side to get to the bathroom. But let’s not quibble. I’ve seen a lot stranger. I once turned down a room in Colombia because the bed was at an incline (one end up was up a step).

On the balcony was a table and chairs from where you could take in that sumptuous panorama. I pictured myself at the table, working. Bliss.

Suddenly, the 3 nights I’d booked simply weren’t enough. And then the thought entered my mind that I needed to secure the place immediately, lest someone steal it from under my nose via an online booking site.

My first full day there was pretty much as it had looked in my mind’s eye: breakfast out on the balcony, followed by some writing. The only thing out of place was the company I was keeping. Specifically, the biggest wasp I’ve ever seen.

Seriously, it was a massive wasp.

It wasn’t the normal yellow and black that I’m used to but I could still tell it was a wasp from its segments. And its pervading aura of evil, obviously. It came over to check me out and I ducked and then jerked out my chair and out the way. Rather than follow me, it headed into my room. I followed it in to chase it back out (well, politely ask if it didn’t mind leaving) but couldn’t see where it had gone. I ultimately located it under the bed, gnawing at the wooden post, and managed to gently persuade it outside with the help of a plastic folder.

Then I did some googling around and found that what I was dealing with was.

This is a kind of spider wasp which hunts tarantulas to use as part of the reproductive process. They paralyse it and lay their eggs on it. The hatchlings then feed on the host.

That’s gruesome enough. But more pertinently, it turns out that they have the second most painful sting of any insect in the world. Only the bullet ant’s is more painful (this according to the entomologist Justin O. Schmidt, who developed his own pain scale)

Fortunately, and as I’d already determined, they’re pretty benign. This one was more than benign – it was positively friendly. In fact, after our first meeting, it would occasionally leave its chilling-out point in the roll down blind to come over and say hi. I didn’t stroke it or give it a hug, but I like to think we had some kind of understanding.

Still, I decided to leave my fancy-dress tarantula outfit safely in my backpack, just in case.

The work was going pretty well, and whenever I took pause I had that amazing view to look at.

In a photo it just looks kind of nice. But I can assure you that when it’s laid out in front of you, it’s more than just ‘nice’. All that greenery… all that space… it has an emotional effect. It makes you feel simultaneously in awe, and yet at peace, and gives you an almost involuntary urge to inhaled deeply, and smile. And to take panoramic photos, obviously.

But man cannot live on views alone. So at lunchtime I’d get back on my scooter and head to a nearby warung for some nasi goreng (a fried rice dish). I’d also take the time to explore some of the local environs. It was a real gift, riding round around in that area, scooting about on narrow tracks through little hamlets.

Evenings also involved getting out, except that by the time I went out it was dark, so my forays were very different, and the danger of hitting potholes much greater. In fact, on the first night, I nearly came a cropper, throwing on the brakes at the last second and thankfully losing only my phone, which went flying from the scooter’s storage pocket, and which I had to find by prowling around using the bike’s headlight.

I’d then sit in a restaurant chatting to other patrons (it was low season, so there weren’t many) or the restaurateur themselves. They were the only company I had all day, barring the guy who brought my breakfast at the guest house (Christ, I sound spoiled), and Fantastic Mr. Wasp.

Day three was less than ideal in work terms, as someone working the fields decided to ignite a big pyre of vegetal matter. With the wind blowing the exact wrong way, my balcony became a special place where acrid smoke hangs out.

Thankfully the pyre was soon extinguished by nature.

The change started merely with a strong breeze and some spattering rain. But the guest house staff clearly knew a storm was on its way, as one of them came running up and rolled the raffia blinds down, securing them with guy ropes. Before long the rain was lashing against the covers, the wind threatening to whip them away entirely. It carried on into the evening, and quite a lot of the night, and was by turns thrilling and relaxing.

By day four, the weather was back to normal, and so was my routine, but I decided I’d had enough. I settled up with the owners and bailed the very next day.

The problem wasn’t the location (which was fantastic), the tarantula hawk (best buddies), or the need to go everywhere by scooter (fun if a tad dangerous). It was the sheer lack of company.

And that’s the thing.

Peace, beauty and solitude are great in the short term. And a break from the norm can be mentally and physically refreshing – I certainly benefited from leaving Europe to spend some time in Indonesia.

But in the long term, many (dare I say most?) people need more than that. And it’s in the long term that books are usually written. If you really want to be prolific, it’s probably better bet to focus on that long view rather than thinking that the problem will be solved by some one-off fantasy writing lodge.

So put some solid habits in place… develop a good sleep routine… build a solid network of friends. In short, create the kind of environment that will help you write / create consistently – day in, day out.

Back to Sidemen, it might not have been a good idea for the medium or long term, but in the short term I bloody loved it. I’d thoroughly recommend it to anyone, especially those for whom Bali hasn’t turned out to be the idyll they’d been hoping for.

I’d like to add that I do think it’s possible to create the right environment for short to medium periods of intense work. Case in point is Dragonfly de la Luz – an old acquaintance of mine that I was surprised to bump into in Ubud (I last saw her – and indeed first met her – in Colombia some nine years earlier, so it was pretty crazy in its own right).

She had gone to Bali specifically to write a book of her own. With this goal in mind, she’d rented a place in Ubud, a town which lacks Sidemen’s raw splendour, but has a lot more going on social (as well as villas with views of rice paddies). She worked most days in cafes, surrounded by like-minded people, and was also on Skype every evening to her boyfriend.

It seemed to work just fine for her – she put in long hours and successfully completed a very substantial first draft while out there.

The point of course being that you probably can make it work if you want to – it just needs a bit more thought (and perhaps a bit less seclusion).

The guest house I stayed at was Bukit Luah Sidemen, in the hamlet of Luah by the village of Sidemen. It’s about 30km (~1 hour) by road from Ubud, and 54km (~1h30m) from Ngurah Rai International Airport. You might want to hire a car or scooter if you plan to stay there a while. Do remember though the two-wheeled transport, in particular, is not for novices (or indeed, some might say, for people who don’t like accidents).

If you’ve never used Booking.com before, and you want to show me some love, sign up with this referral link – we both get a £15 reward.

Have you ever secluded yourself for the purposes of writing? How did your experience work out? What’s the most ill-advised friendship you’ve ever struck up with an insect?

← I Went to Russia for the World Cup and All You Got Were These 4 Lousy Videos
Podcast #1: Pandora’s Backpack →