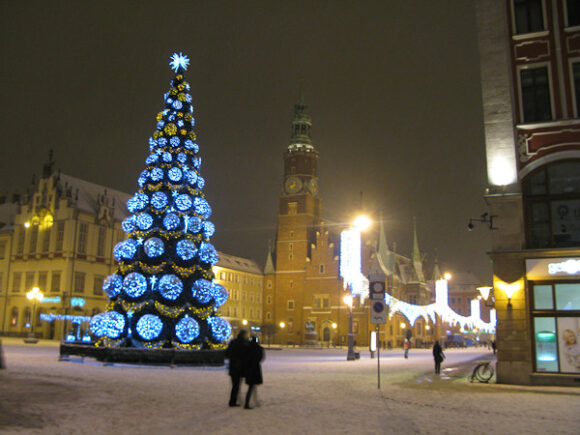 People think it’s a bit odd to go to somewhere like Poland in winter. But actually it makes a lot of sense for reasons I’ll go into at a later stage. It’s true that it’s a mite chilly, though.

“It’s very cold,” I say to one of the hostel receptionists, performing some cheerful English exaggerated-hand-rubbing-whilst-smiling nonsense.

Crucially, it’s wavering between about -4 and -6 degrees Celsius, which means that the snow that is silently falling outside stays as the powdery virgin white stuff and never becomes the ugly dirty wet stuff. The further consequence is that my ill-advised footwear (a pair of non-waterproof Campers) remains without a dark, wet strip where leather meets sole (‘the high-tide mark of stupidity’ I’ve just decided to call it).

There’s lots of snow around in Wroclaw, something which I’m enjoying greatly. Here are things I’m genuinely loving about the snow:

– I love alternating between freshness of outside and the welcoming warmth of inside.

– I love waking up and trying to remember to behave like a grown man whilst being excited that it’s secretly snowed during the night.

– I love the way that going to the shop to buy muesli suddenly becomes a special adventure.

Even sitting in the hostel is good when it’s snowing. It’s very calming being able to sit at your desk writing whilst occasionally eye-flirting with the stuff as it gently falls on the other side of the window.

What I don’t love so much is having that conversation about how rubbish we (the British, or more specifically the English) are at dealing with even the slightest dusting of the white stuff, yet it’s still a conversation I seem to have an awful lot.

We (the English) seem to be talking about our weather coping inadequacy more and more. I think it’s the internet – our weather-based conversation remains alive and well, but with the added sense of global awareness. Also in good shape is our ability to deal with a problem using self-deprecating humour rather than manpower and winter tyres.

They are pretty adept about dealing with it here. It could be 9pm on a Sunday night yet down at the Rynek (Market Square) there are people are out clearing the snow away with shovels. They’ve got a system. Their snow goes away because they make it go away. At least from places where it would be annoying.

Me, I like the snow – I think we’ve gathered that – but soon it will be going all non-snowy. I’m told that spring here is great, but to get from one to the other will mean going through the slushy period. And I’m not so keen on that. So let’s just focus on the snow for now.

Are you a snow-liker? What are your own efforts like at dealing with the snow? Do you have an integrated snow-clearance policy?

← Slow Coach to Poland
Wroclaw in the Snow (Gallery) →