With the shenanigans of Christmas out the way, it’s time to head off to foreign climes. And this time it’s Poland.

I’ve decided to take a coach there from the UK, instead of  flying. But can you really get any work done on a coach? 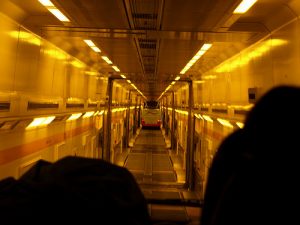 I’ve paid £71 (about US$108) for the ticket on a journey which is due to take around 19 hours. But why take the coach in the first place?

1. I want to have some adventure.

2. I want to do my bit for the environment.

At best, this is completely misguided. The opportunity for adventure on a direct bus along the highways of Europe is always going to be limited. And in years to come when, as a global society, we’ve completed project ‘trash the planet’ I somehow doubt the next generation is going to be all that impressed when I shrug my shoulders and say “I went to Poland on the coach once.”

So, despite the naysayers’ cat calls of “You’re an idiot – why don’t you just fly” and “If you were really serious about saving the planet you’d just stay in the UK”, I bravely set out from Victoria Coach Station in London on the overland (and briefly underland) journey to Poland.

The first bit of the journey is quite fiddly in comparison with the rest. We head to the green-tinged chalk faces of the coast before doubling back to the Eurotunnel terminal. The coach enters the drive-on carriage, and then we power on under the channel. It’s a curiously disconnected experience as the height of the coach means you can’t see through the windows. But once the radio fizzes back into life with a French station we now we’re pretty much there.

Soon we’re getting into a long distance rhythm on the the main vein of the French autoroute, at which point I remember the other reason for taking the coach:

This is probably just as unlikely as the first two, but I may as well give it a go.

“Will there be wifi?” asked one of my friends before I left, raising my hopes briefly.

“No, there won’t be,” would have been the correct answer. “Nor will there be any power sockets.”

The latter is the main issue, as it means the time I can work is limited. I’d been weighing up buying a spare battery for my ageing netbook, whose life has decreased from its prime of 10 hours to less than half that, but had never quite managed to justify it. Which at least is yet more good news for the planet.

“I could have bought a second battery for my laptop, but I didn’t.”

The guys in front of me have their seats reclined, meaning I have to recline mine, too. With my computer out, this is less than ideal. In order to fit in the whole human-computer conjunction in place (me, with netbook in front and room enough to type) I have to sit at the kind of angle which would give me whiplash if a butterfly so much as brushed the windscreen.

It’s just as well they don’t do workstation ergonomics spot-checks on long distance coaches. And not just because that would be really strange.

But even once I’m set up, I find it hard to focus due to the limited space, the dubbed films constantly showing on the flat-panel TV and the strange tension of wondering when we’re finally going to stop and get some proper food.

I had a massive full English breakfast at Victoria, but all I have by the way of food for the journey is four Mars bars. I just assumed we’d be stopping at service stations, but every rest stop consists of washrooms and nada mas.

I’m listening to music to blot out the television, but that just means I can hear both, so I switch to earplugs to deaden the sound. They do nothing – it must be deliberately broadcasting at a special earplug-defeating frequency.

But the biggest distraction is an internal one – the ennui and restlessness that builds up on coaches, making it hard to focus on any one thing for more than five minutes. I find myself switching between laptop, Kindle and window staring, trying to get some quality work done, and just about succeeding. I can generally work pretty well on coaches, so I suspect today’s confectionery-only diet may be partly to blame.

Outside the highway just rolls on and on.If you were taking the coach to see a bit of scenery you’d be disappointed – it’s mostly flat and unremarkable. The only real indication of progress is when the road signs switch from French to Dutch and then again to German. 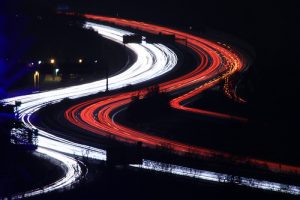 The sun sets in an orange fireball as we pass through Duisburg, the traffic slowly becoming a smear of white and red lights in my peripheral vision. I battle on with my laptop, squeezing what work I can out of myself, but eventually the batteries have had enough, and so have I. I switch it all off.

It’s time to treat myself to a film. Getting work done on the coach has been a battle and I feel like I’ve earnt it. I switch to my iPod and treat myself to the film Glengarry Glen Ross on a 3.5 inch screen. This David Lynch clip was made specifically for people like me.

All around me people are turning in for the evening. In this case ‘turning in’ means adopting a marginally different seating position, and closing your eyes. Or for the lucky ones, lying across two seats in a fetal position with an item of clothing for a pillow. I’m too tall for the latter, so I sit there in jeans and shirt trying to get comfortable by use of the ‘restless writhing’ technique.

Aware of the vulnerability of my tech stuff, I wrap the strap of my back round my leg in such a way that it doesn’t restrict my movement, but that if I have to get off in a hurry I’ll end up flying headlong down the aisle like I’ve been tackled by one of those leg-snare throwing weapons made of rope and weights.

I try to get some sleep but I’m in that constant state of semi-attentiveness – like when you’re expecting an important email – because I don’t want to miss my stop. I’m balancing delicately and frustratingly on the very brink of sleep, but then every time the bus comes to a halt, I’m up like a mierkat. I’ve set an alarm for 15 minutes before, and it would be nice to rely on that, but what if we’re early?

He’s back, and this time it’s Poland

Finally, we arrive in Wroclaw. It’s 4:30am – right on time, then – and a mild (for Poland in winter) -5 degs Celcius. I skid about on the refrozen ice outside the bus station, my backpack giving me a hilariously high centre of gravity, and take a taxi to my accommodation.

Within fifteen minutes of the coach having arrived I’m smothered in billowing cotton, taking deep drags of fabric conditioner in what I’ve just decided is the best bed in the whole damn world.

Have you ever taken a very long coach journey for poorly-considered reasons? Did you remember to bring more than just four Mars bars? What position do you prefer to adopt when kidding yourself that you’re actually going to get some sleep?

← That All-Important Introduction
Winter in Wroclaw →