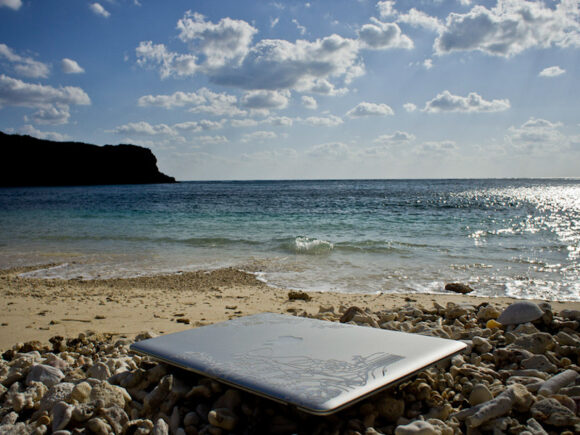 What is a Digital Nomad?

It’s a horrible term, but we’re stuck with it. At least until a newer and yet-more-horrible term comes along to replace it. So what does it mean?

A digital nomad is a location-independent professional who uses technology to facilitate their work.

The digital bit refers to the use of technology. This really just means the internet, as this allows them to find work, perform it and receive money for it, all interspersed with the watching of videos of laughing capybaras or whatever the latest meme is (something us insiders refer to as ‘training’).

The nomad bit is just one of many awkward synonyms that travel bloggers use to mean you travel about. Wherever you lay your protective neoprene cover, that’s your home.

Given the proliferation of technology, many people can now do their jobs anywhere that there’s a decent wifi connection. Sites like Upwork and peopleperhour mean that anyone can find contract work online and get paid for it. And let’s face it…

If you can travel and work, why wouldn’t you?

You get to see new places, you get to meet new people, and you have a whole new country of food to Instagram the crap out of. As I say, why wouldn’t you?

It seems to be primarily young people that become digital nomads, and not just because they are more likely to be armed with the requisite levels of irony to be able to refer to themselves as such.

Young people tend to be more open to the opportunity, more comfortable with the technology, and are are less likely to have the kind of physical problems that require quick access to quality healthcare. Well, at least until they’ve been to Vang Vieng.

They’re also less likely to be unencumbered by those pesky little people that suddenly appear as a result of adult relations.

In terms of the types of people, we’re talking about pretty much anybody with an entrepreneurial spirit, a laptop and a willingness to frustrate themselves by forcing themselves to get work done when all their peers around them are larking about in the nearby mud volcano. 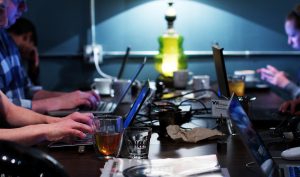 It’s a lovely day – let’s all stay inside and faff around on Facebook.
(Photo: Joselito Tagarao – Flickr)

It’s only recently that this has become widely possible. Not long ago, laptops were too heavy (3kg was normal), battery life was too poor (1-2 hours) and wifi was too non-existent.

When I went on my first big trip back in 2002, I took a cassette Walkman and a 35mm compact camera, using internet cafes once or twice a week when needed to make digital contact.

Things have changed. The arrival of netbooks in late 2007 was a notable landmark. Suddenly computers were small enough, light enough and with enough battery life to make doing business from a secluded beach a serious, if intensely annoying, proposition. Since then tablets have come in, and people carry smartphones, digital cameras, ereaders and even fitbits.

It’s not just the mobile nature of technology, but the way the society has embraced it. The change to a situation where the internet is at the heart of everything has created location independence as a side-effect.

The result is that backpackers are becoming cyborg-like beings that stalk the earth in robotic exoskeletons, like Ripley at the end of Aliens. A major part of staying in hostels is now about locating the best bed for charging all your devices. At least whilst we wait for beds to be replaced by cyborg docking stations.

Travel is the enemy of productivity, so the role tends to lend itself to slow spurts of travel. Most digital nomads I’ve met spend a few weeks here, a few months there – something which allows you to get into a routine.

This also helps with the problem of regret: if you went to Cusco for a week but spent the whole time designing the website for a kitchenware company in Baltimore, and never got to see Machu Picchu, you’d probably feel like you missed out. By staying longer, you hopefully get to do both.

But even then it’s tough. It becomes nearly impossible to separate work from play and any sense of routine goes out the window (albeit an exciting, foreign window). If you don’t manage it right you can end up designing said kichenware website on top of that mountain you were determined to climb. 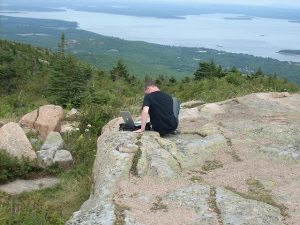 Disconnecting is a real problem for the digital nomad. If you do pretty much everything in your life via your computer, how do you know when it’s time to switch it off?

It can be hard enough to disconnect even if you don’t make your living digitally. I once met a guy in a hostel who had managed to invert his waking hours such that he had become wholly nocturnal. By night he was a Youtube addict, and by day he could be found clutching his netbook in a foetal position in his dorm bed.

There is no right or wrong way of going about it, but there are probably some that are less likely to result in actual work getting done.

One way would be to hire an apartment via somewhere like airbnb, get work done in a co-working site and socialise via Couchsurfing meetups, local Facebook groups and the like. This sounds like a solid basis for success.

Another, probably more common, way is to stay in hostels and get work done slumped awkwardly on a dorm bed, ideally whilst working on some project related to the effects of bad posture on long-term spinal health.

The coffice (there is no shortage of horrible names in this sphere) is another staple of the location-independent worker. This refers to a cafe that you use as an office. It’s all part of a desire to stir work and life up into an indivisible slurry whereby you’re never quite fully working or fully relaxing.

Where do people do this?

Digital nomads tend to hang out cheaper parts of the world, as it makes the model more viable. Strangely, many favour idyllic and sunny places over remote, desolate places.

It takes all sorts, of course, but pretty much anywhere with good wifi and the chance to spill skinny chai latte over your expensive kit is going to be popular.

What jobs are there?

The number of jobs that can be done independent of location is big and growing.

There are photographers, translators, writers, teachers, bloggers, lawyers, and so on. A particularly common type is the entrepreneur, or even serial entrepreneur (as Merlin Mann says ‘That’s internet for “I installed WordPress TWICE.”).

As Forbes point out, you could even be a phone sex worker, something which they reckon can potentially bring in a six-figure (US Dollar) salary.

In short, the digital nomad is here to stay and the opportunities available to be one are only going to increase. Let’s just hope we can think up a better name for it.

Are you a digital nomad? Can you tell people without apologising or laughing awkwardly? What would you rather we called you?

← Getting the Long View
Taking the Polskibus to Warsaw →