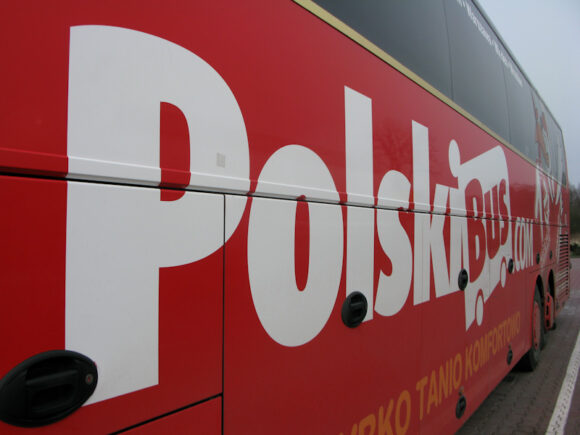 Taking the Polskibus to Warsaw

Having decided to make the trip to Warsaw, I took a tip from a friend and used the coach company called Polskibus. But would it be any better than the Eurolines service I took to get here? And would I actually get any work done?

I admit I’m out of practice. There was a time when I’d do a 20-hour-plus bus journey without blinking (mainly because I prefer to wink – it’s both friendlier and more patronising). Even the 19 hour journey here is now a distant memory.

Polskibus only launched in 2011, so the vehicles are still all bright, shiny and new. They’re also pretty hard to miss given their distinctive pillar-box red livery. Please note that I didn’t have a Pantone color chart on me so I could be a few shades out there.

Their network criss-crosses Poland, and also makes forages out internationally to Berlin, Bratislava, Prague and Vienna. It’s clearly a popular service, and the coach I took was full, populated almost entirely by young, studenty types.

I didn’t check the prices of competing firms, but then at around 30PLN (6GBP/10USD/7EUR) for a 6 hour trip , plus 1PLN booking fee it’s hard to complain. I booked late and hence paid 40PLN, but then the train fare I checked online was 65PLN, so it was still good value.

For that money you get good, comfortable reclining seats, tinted windows, wifi and, best of all, electricity sockets (one per seat, hidden below the armrest between the seats).

It’s the first time I’ve used wifi on a long-distance coach, and it was pretty decent if highly variable in speed and prone to dropping out occasionally. It wasn’t happy streaming my Spotify music though, perhaps because of the network setup – you need to click a confirm box to use a web browser. 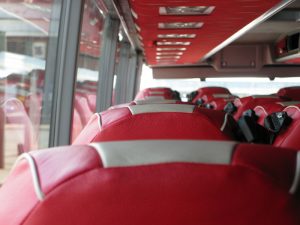 The journey was flat in its entirety. Fields. Trees. Trees in fields. Fields bordered by trees. Towns, villages and cities, too, all with their own tree/field specimens. At times there were long stretches of baffles, presumably to block sound or visual pollution, or maybe because there was a tree or field so interesting that they thought might prove distracting to the driver.

Maintaining your attention whilst working on a coach is like trying to successfully balance stuff on a slippy tray whilst being shaken about in a big metal box. There’s also a whole bunch of internal and external factors to test you, regardless of the quality of the coach you’re on. So you’ll never get the same work done as you would in an office, and you have to adjust your expectations accordingly.

On this particular journey the guy in front was playing the randomly-reclining game, meaning I had to stay on my toes to stop my screen being suddenly crushed. Also, the roads were occasionally very juddery. But the main problem came from sleepiness: even a modest lack of sleep the night before and a coach journey can make me feel like somebody’s slipped something in my drink.

All in all, it was pretty decent. By the end of 5 1/2 hours on the road, I’d done about 2h 20 minutes of work plus a stint in dreamland, and that’s about as good as you can probably hope for under the circumstances.

Added to this, we even got a half an hour break at a place with actual real-life food and drink. Take note Eurolines, who didn’t think this was necessary on a journey from the UK to Poland that spanned 19 hours.

It wasn’t a journey of joy – I much prefer trains to coaches – but it was cheap, comfortable, and I’d definitely recommend it. In fact, I may have to write an open letter begging them to extend their network to the UK. I’d certainly use them.

Have you ever used Polskibus? Have you ever  tried to get work done on a coach?  How about balancing stuff on a slippy tray whilst being shaken about in a big metal box? 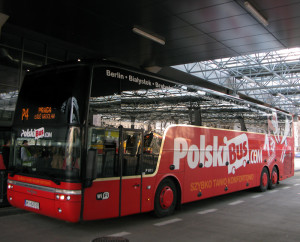 ← What is a Digital Nomad?
Stephen King →