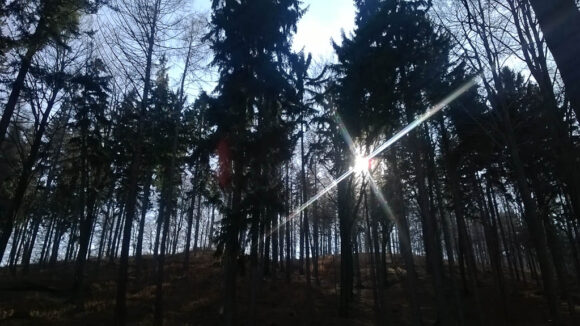 Into the (Slightly) Wild – Hiking in the Owl Mountains

As we hiked up into the wooded foothills of the Owl Mountains of Poland, I turned to look back on the town of Bielawa.

“The problem with this kind of hiking,” I said, “is that it just makes me hanker for more exotic places.”

I was probably just in a funny mood because of the way things had started out.

A companion and I (which makes me sound like The Doctor) had headed out of town to stretch our eyes a bit and see something of the green stuff. We’d planned to hang out for a bit round a reservoir before hiking, but when we got there it appeared that someone had accidentally pulled out the plug with their big toe. 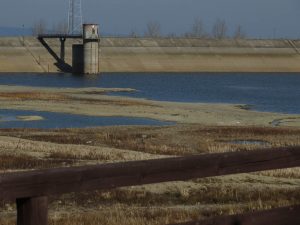 But nevertheless, I found this feeling common back home. England is so tame that the most you’re likely to see is the occasional wild fish. And even then, if you get close enough you’ll find it’s on a lead.

Meanwhile, I think of some of the hiking I’ve done in Patagonia, or Colombia, or even in Poland’s Tatra mountains. Sure all these trips were done on hiking trails, and yes there were other people around, but in each one of them I had that sense of being a long way from built-up urban centres. Being out in the wilds a bit.

I’m a total hypocrite, though, as when my companion suggested we went off the beaten track, I looked at the thick bedding of leaves we’d have to fight through and argued against it.

But my companion won out, so we were soon foraging upwards, ankle-deep in leaves, the town becoming gradually more and more obscured by trees behind us.

We were both making heavy work of it. In fact, one of the problems with not being on the beaten track, it turned out, was that the ground was boggy. So we started hunting for the beaten track so we could apologise to it and walk along that bit more easily. 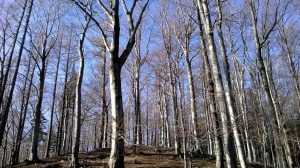 We’d just spotted a track and started heading towards it when my companion noticed something else.

There, treading gingerly down the path, in some kind of strange role reversal, were two deer. They stopped, too, and looked at us in a similar manner, albeit without the pointing.

In one fell swoop all my ‘it’s not wild enough’ internal chatter was brushed aside. We just stood there for what seemed like an age, the deer and us, all probably thinking the same thing.

After some five minutes of staring, the deer decided to carry on down the hill path, and we continued upwards.

The path continued, cutting round the outside of a wooded hill, past piles of freshly cut pine logs. I found myself in a dream world, pondering on how amazing freshly chopped down trees smell, and how unfortunate this is.

Just then we heard a noise. A tremendous rustling, like the dead-leaf equivalent of an avalanche. Again we stopped and looked. What was it this time?

It was charging away up the hillside, its trotters scrabbling about on the greasy surface. And I guess that was nature giving me another slap for my insolence, just in case I missed the first one. 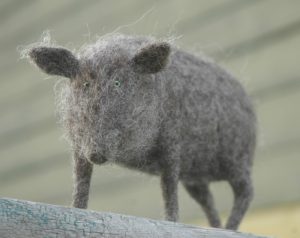 Whilst I was thrilled, my companion’s overriding emotion was one of concern. Her dog was attacked by a boar, she told me, and it was injured so badly they’d had to carry the poor thing back home. Indeed, in this region of the world in general there are lots of wild animals. Forget boars – there are bears. Which is great. Well, in theory. As I said in a recent post about HP Lovecraft, I like the idea of danger, but not the actuality.

“Let’s stay on the path from now on,” she said. “It’s probably a lot more scared of us!” I said. I didn’t say this too loudly, though, in case the boar overheard and came back to show us otherwise.

The path petered out and we lost it again, so we rustled up the hillside and settled down on the nearest summit for lunch. I want to add ‘accompanied by tweeting birds’ to complete the picture, but there were no birds at all. I think by this point the forest was just enjoying messing with my expectations. 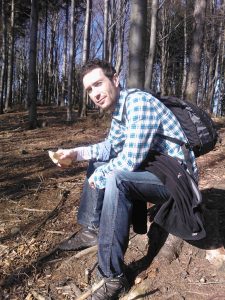 Into the Wild: If that guy in the film had been carrying loads of garlic bread, he’d have survived. (Photo: Dorota Domino.)

I told my companion how pleased I was with the deer and the boar; that it was the closest contact I’d ever had with wild animals like that.

Then I remembered I was talking out my arse. Okay, so I’ve never jumped on a wild camel and ridden round on it going ‘Yee-ha!’ but I have been to the Galapagos and the Bolivian Pampas, just for starters, and if you can’t find wild animals in those places you shouldn’t be allowed out the house in the first place. I even had a snake crap on me once during a photo opportunity. You could argue that’s fairly close.

I also went through a period of being followed by stray dogs through small South American towns, but let’s not go into that.

So, seeing biggish animals in their natural habitat wasn’t a first. But it was still great.

The moral of the story, if I have to force one, is that you shouldn’t underestimate places. Or maybe that there’s loads of cool natural stuff about, even in Europe, and you don’t have to go away to faraway places to find it. Or maybe that if you want something cool to happen, you need to whinge.

What animals have you encountered in the wild? Who was more scared of who? Did any of them appear as a result of you whingeing?