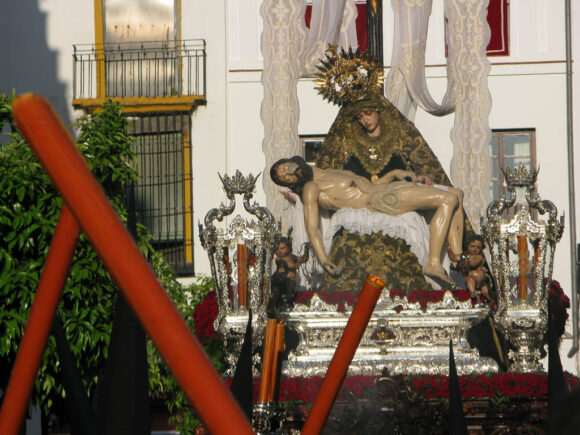 Semana Santa or Holy Week is an annual festival during the lead up to Easter Weekend, and the one in Seville is famous for being, you know, really good. The main spectacle is that of the processions, run by the city’s various brotherhoods.

I was living in Seville at the time Semana Santa a couple of years ago, and almost didn’t bother going out because I didn’t think it would be up to much.

What a mistake that would have been. Semana Santa in Seville is amazing. Here’s why:

1. The beauty of the centuries-old pasos

Made of wood and often either gilded or silver-plated. The floats, or pasos, are the centrepiece of the procession. Sumptuous is not the word. A lot of other words are not the word either, but I’m not going to list them all. Just look in a dictionary – it’s most of them. 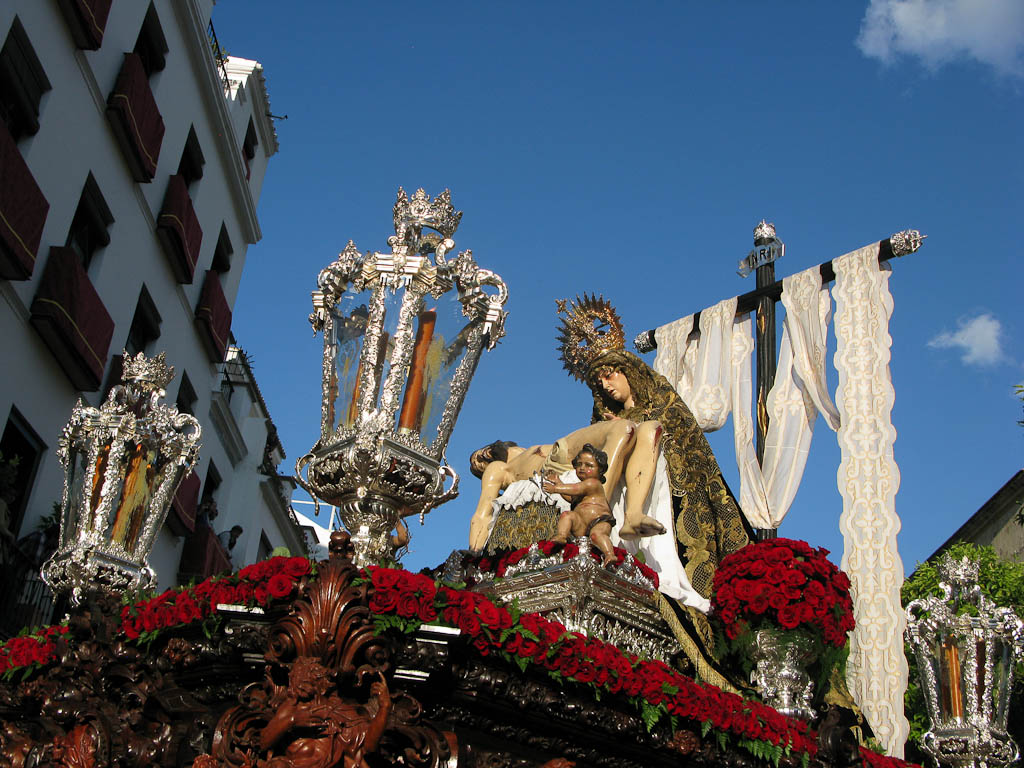 2. The detail in the figures

They’re generally all life-size and bigger and are embellished with blood and tears. The clothes alone are something special. You can’t get those down Pull and Bear. Which is a shame, really. 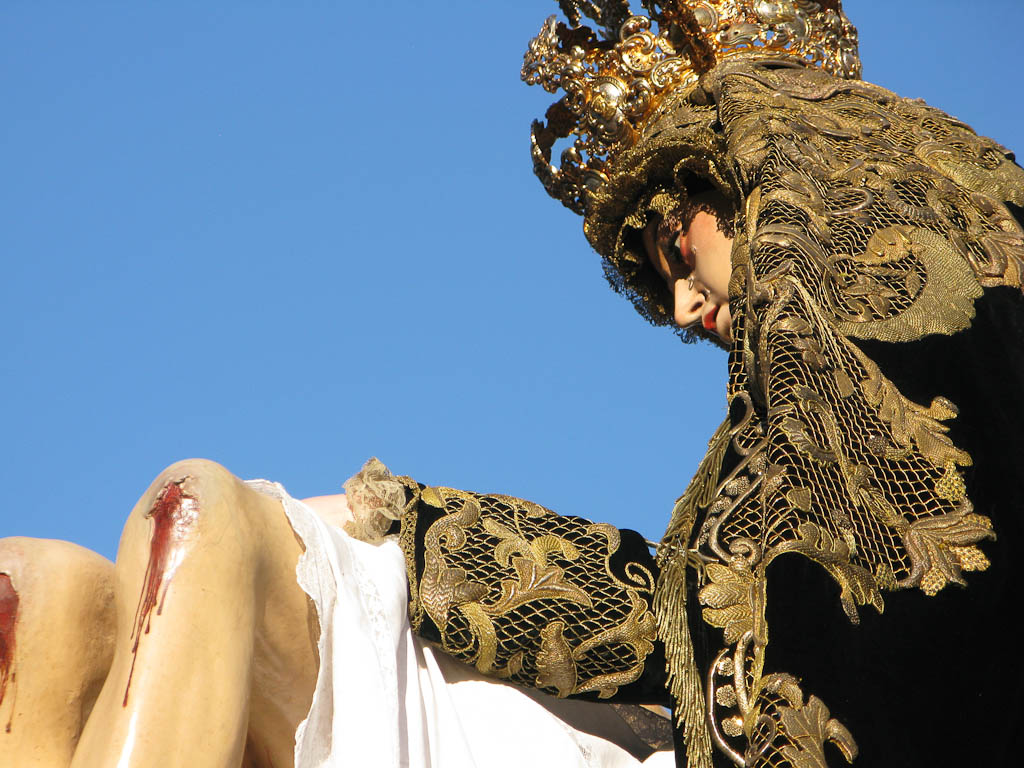 3. The permanently jaunty gait as they move

They rock like a four-poster bed on wedding night! Sorry, that’s probably inappropriate.

At first sight for a lot of the people they look sinister, like something from the era of civil rights and such. But, honestly, that passes. 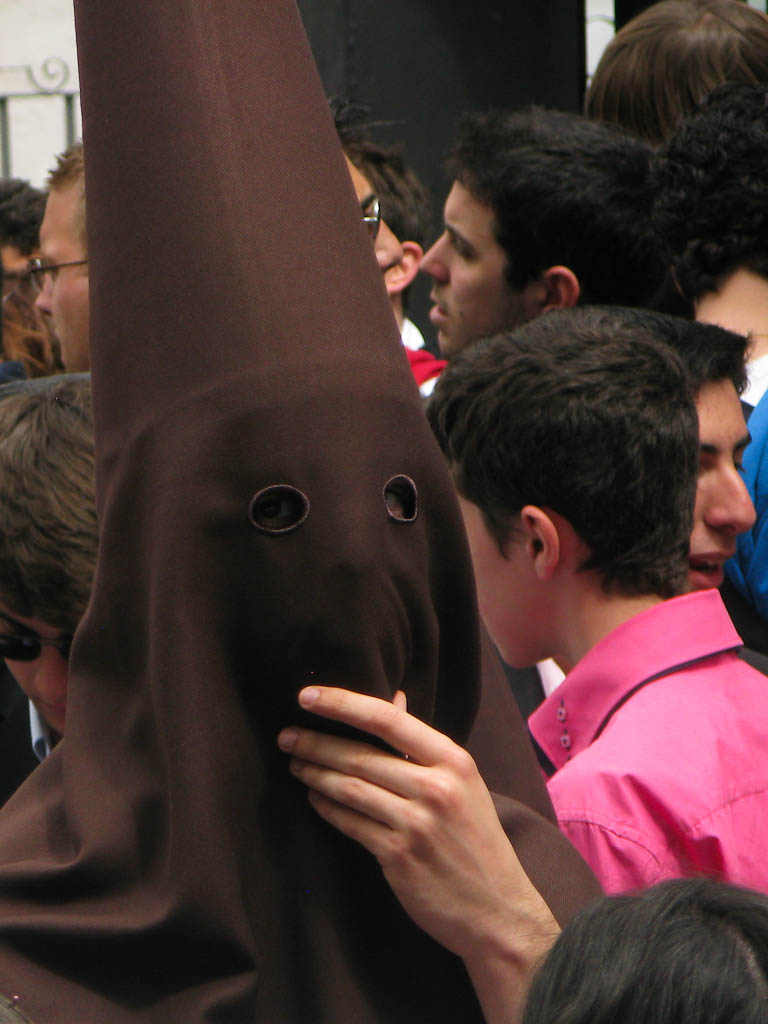 Actually, that still looks quite sinister. 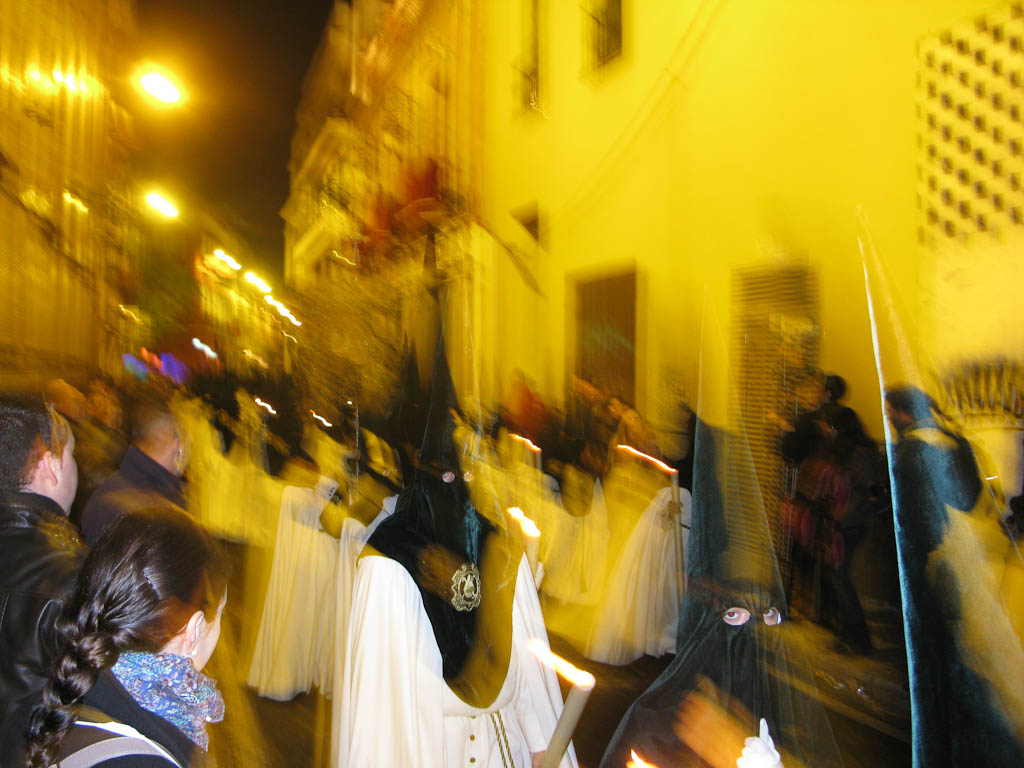 5. The sheer number of people involved in the processions

6. The sheer number of people watching

It’s probably not one for the claustrophobic, but boy do you know you’re part of something. Where-ever you go, if there’s a procession due, there are people. And the fact that so many are there is part of what gives it such a strong sense of occasion. 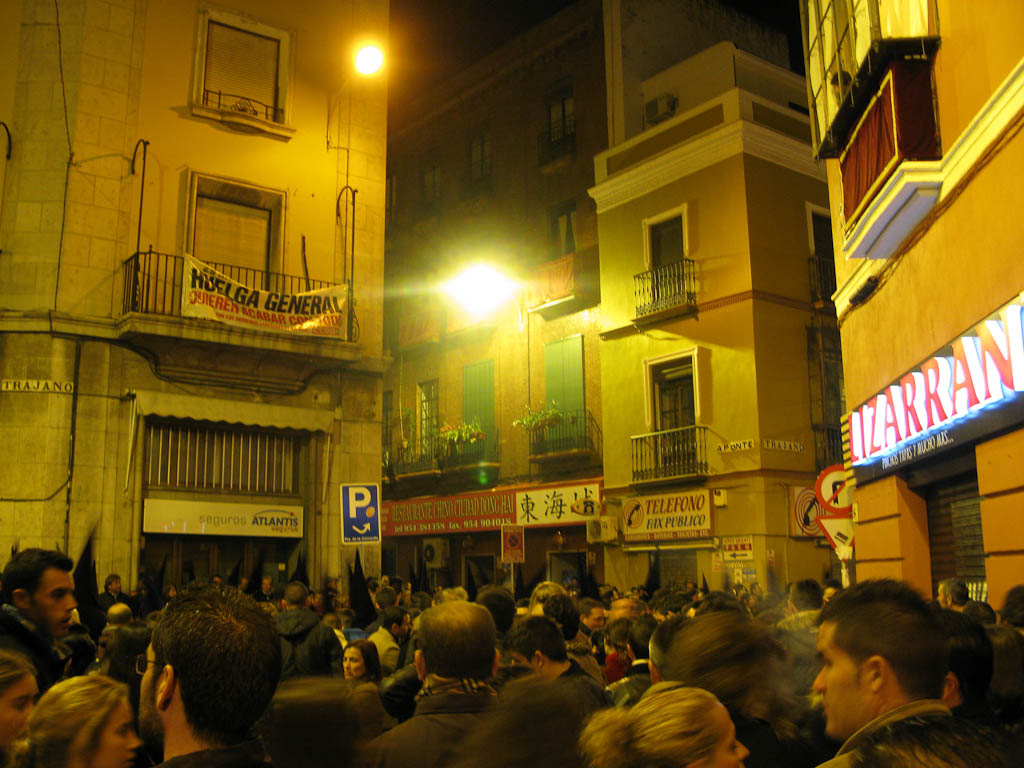 7. The pomp and ceremony

There are more ‘why is he/she carrying that?’ moments than you can count, but it doesn’t matter. You can just enjoy it for what it is. 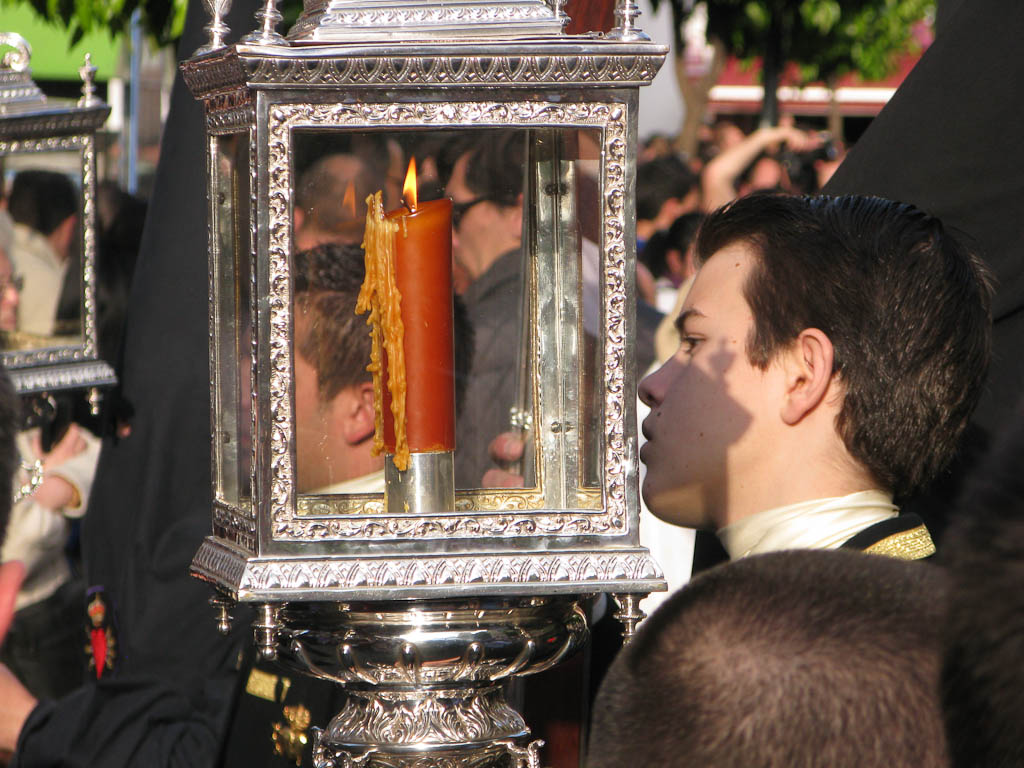 8. The fact you don’t need to be religious to enjoy it

I’m not religious in the slightest, and it really doesn’t matter. No doubt I get something different out of it than a devout Christian, but it’s a spectacle in its own right. 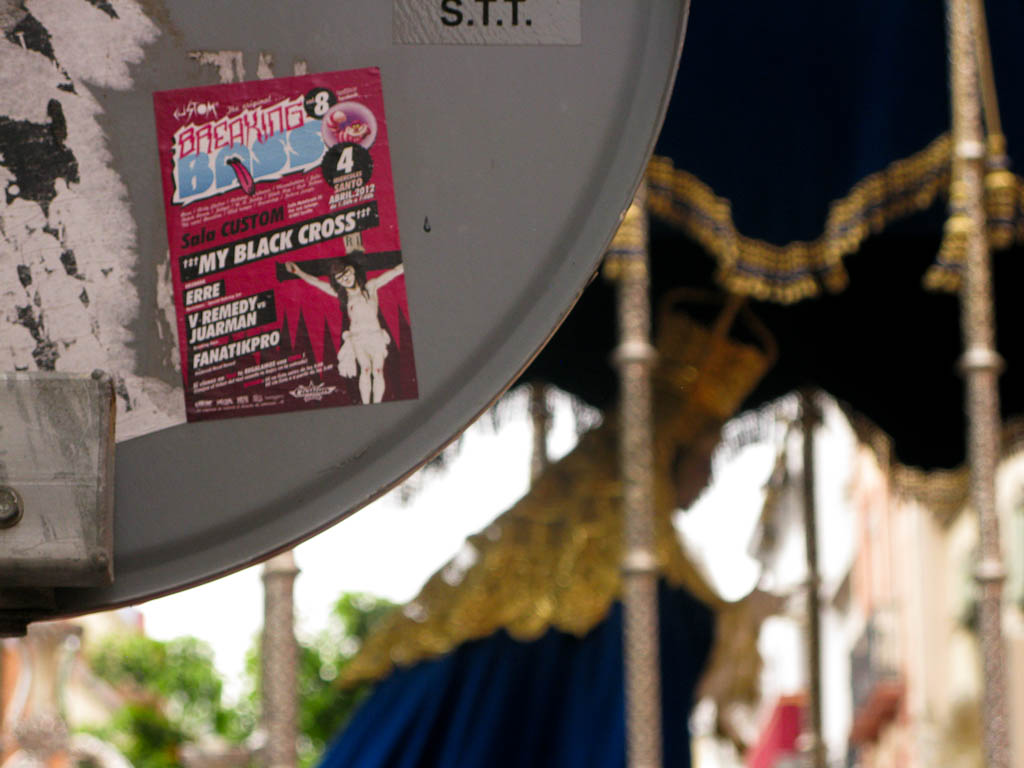 9. People applauding just because they turned it round a bit

That’s how pumped up everyone is.

10. The manpower involved in carrying them

This is not like moving your dining table around to see where it fits best. These things are heavy. They weigh well over a ton and need as many as 54 costaleros (paso-bearers) each. They’re hidden from view by a curtain – so it looks like the pasos are moving on their own, and an overseer tells them what to do by voice or using a door knocker type thing. 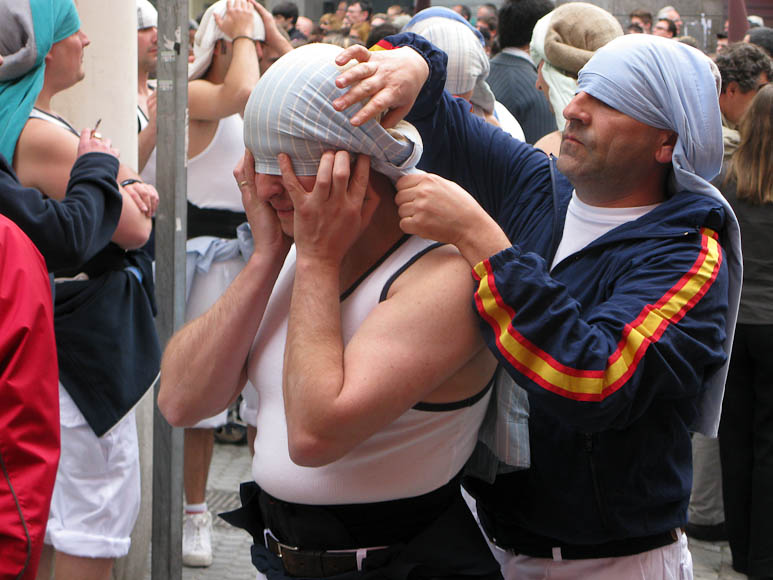 11. The ridiculous length of time their journey takes

These things are on the move for sometime between 6 and 14 hours, to cover a distance you could manage on foot in maybe half an hour. Well, if you weren’t carrying a massive paso as part of a thousand-plus strong religious procession. 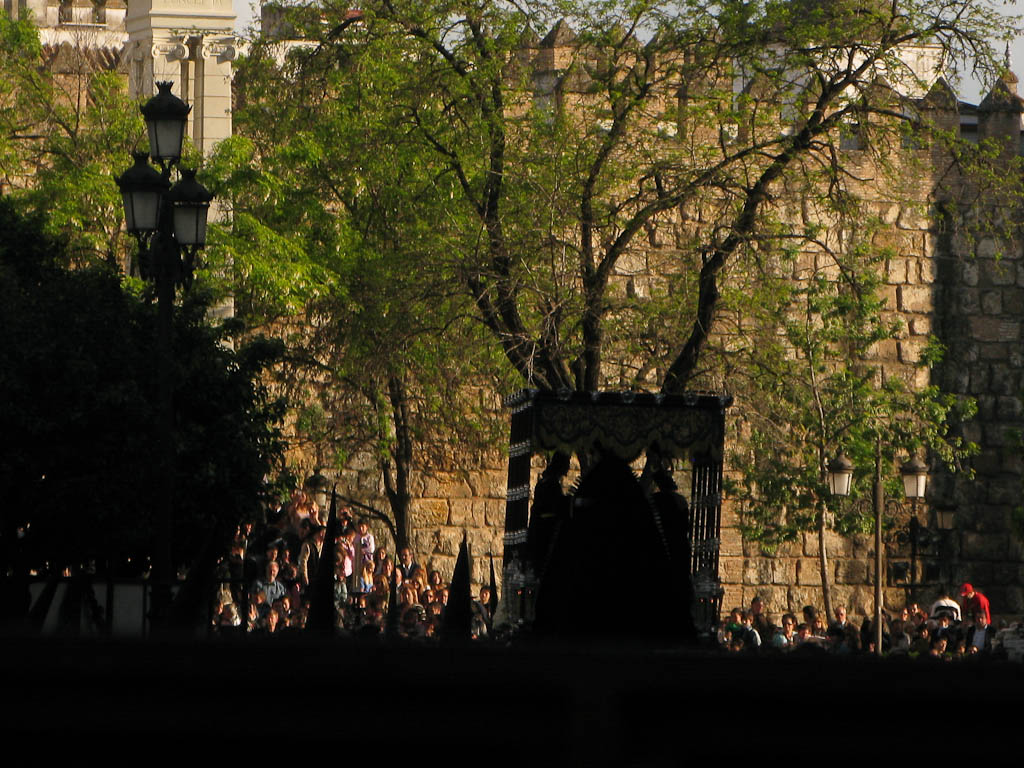 That time you managed to get the sofa through the lounge door? Not in the same league.

13. The smell of wax and incense

Thick draughts of incense blow across you, mingling with the scent of wax carried by nazarenos, and. For ages afterwards, the cobbles of Seville will squeak underfoot from the waxy coating, and forever afterwards the slightest hint of sweet incense will transport you back. 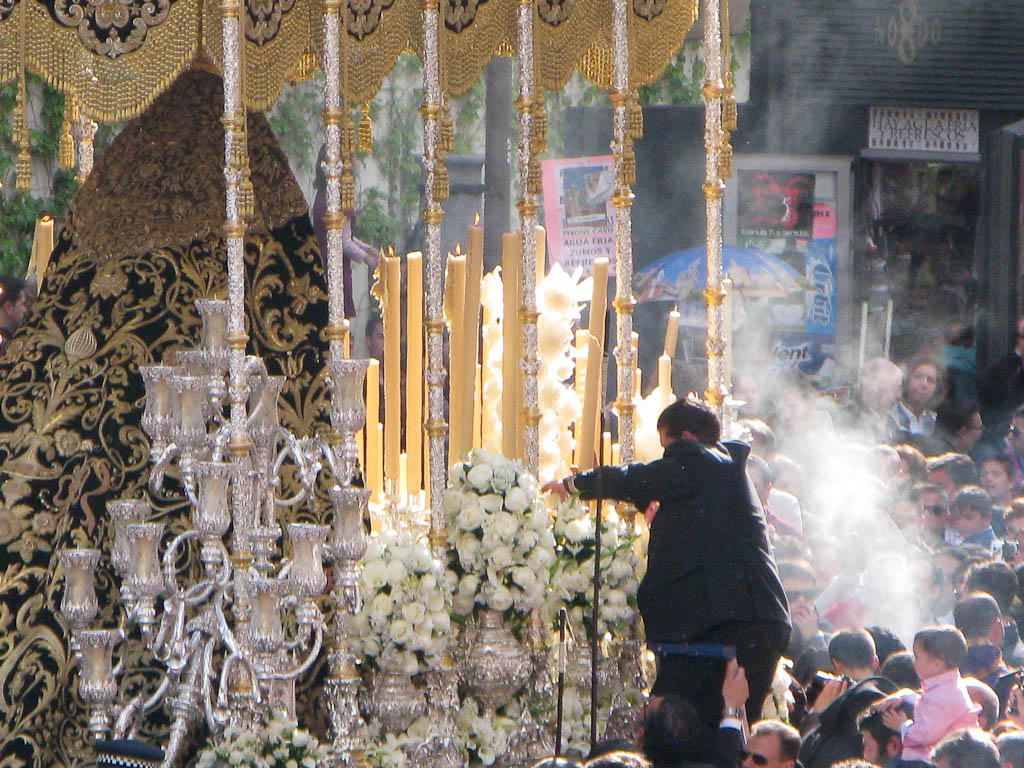 14. Staying up all night watching processions

On Thursday night / Friday morning, known as La Madrugá, the processions run all night, and thousands stay up to watch them. I’m aware of how much of a crazy night that doesn’t sound. But there’s something really cool about being up in the earlier hours and wandering the streets and it not being because you’re leathered and can’t find your way home.

There’s a whole different atmosphere at night, too, the pasos seeming to loom out at you. 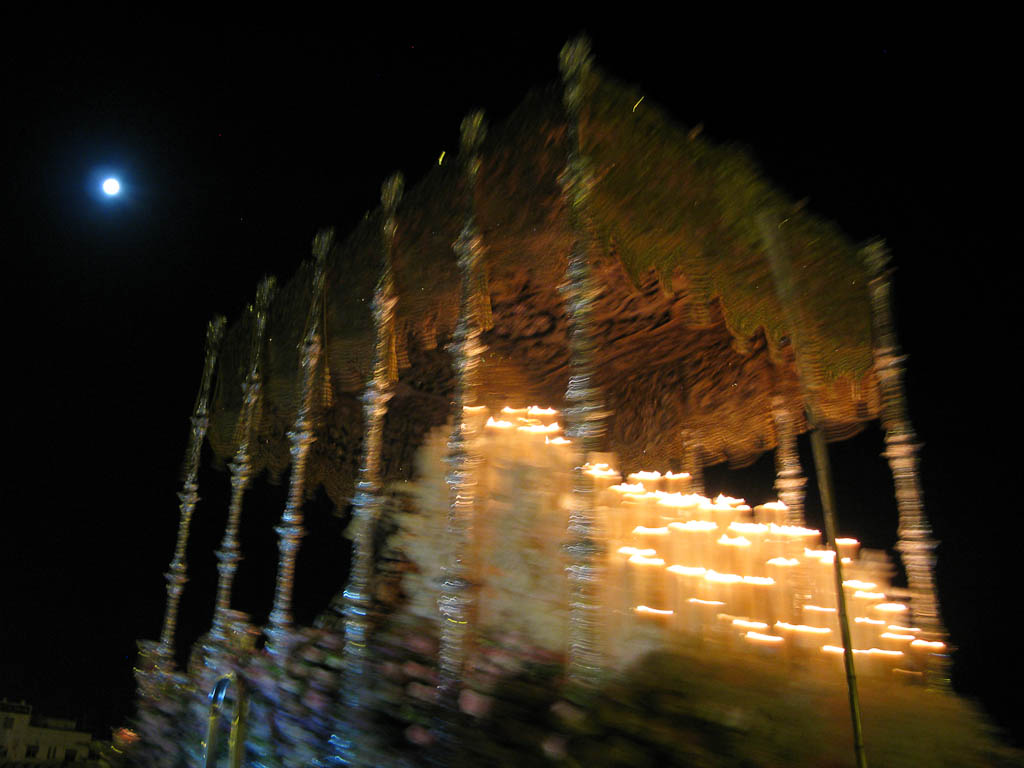 16. Keeping the candles lit the whole time, even though you’re outside

Because merely carrying a massive gilded paso through town for the best part of a day is just a bit lightweight on its own. 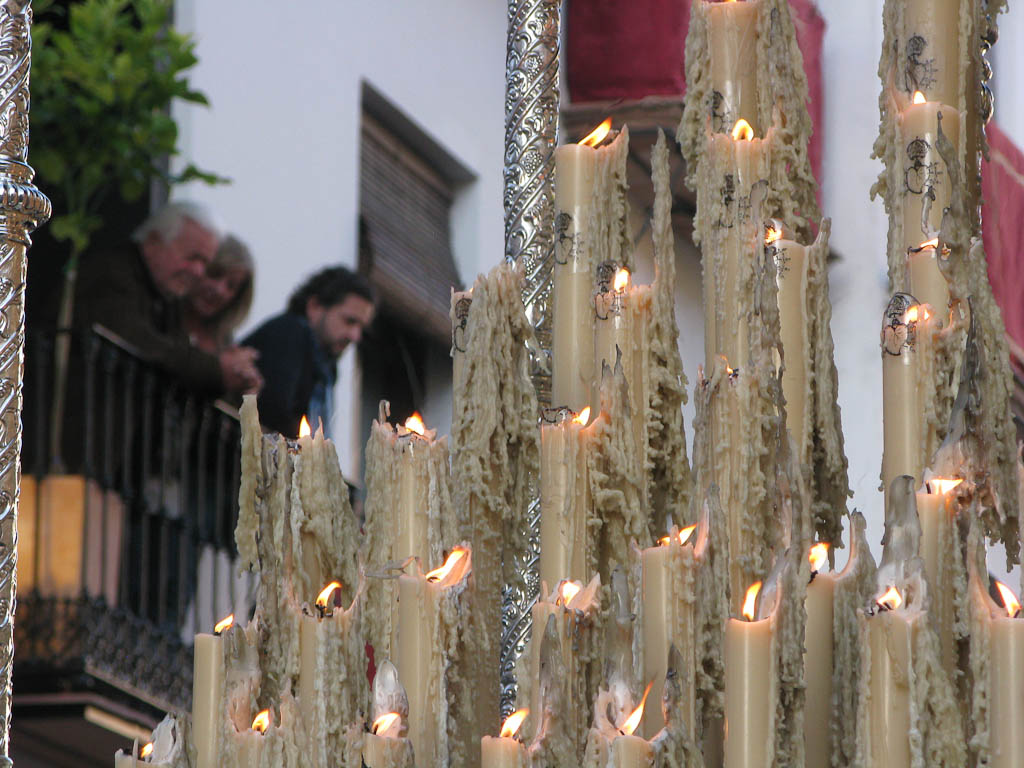 17. Triumphantly starting again after a break

They’ve stopped to let another procession through, to relight some candles, or to let the costeleros have a cup of tea (wait, wrong country), and now they’re ready to go again. But even that’s done with pomp – they practically throw the thing in the air, and then swagger off to a drummers riff.

18. Seeing them from a distance

Here they head under Las Setas (The Mushrooms) as the locals call the Metropol Parasol structure at Plaza de la Encarnacion. 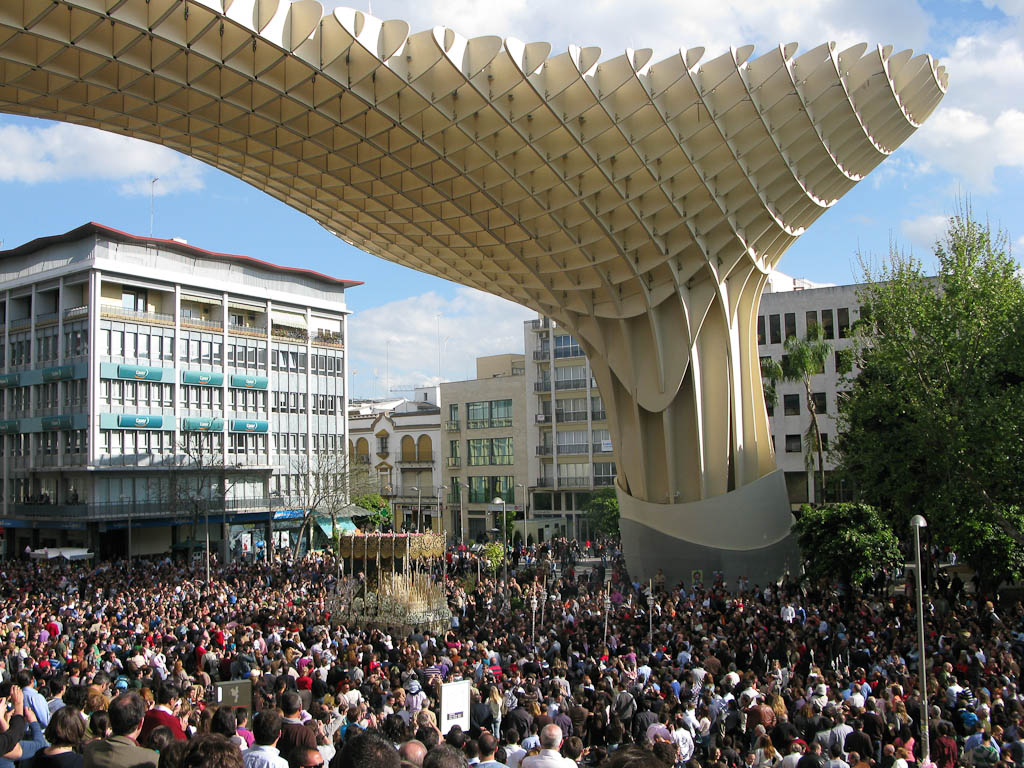 19. Seeing them up close

After that, seeing them in a narrow street is like the difference between a stadium concert and an intimate little gig.

Some processions are deliberately completely silent, but most are accompanied by a marching band, with trumpets making a particularly big appearance. At first it’s just like ‘those trumpets sound weird and squeaky’, but if you’re anything like me then after a few days of it you’ll be thinking ‘I LOVE THE SQUEAKY TRUMPETS’. And then you hear the first strain of it in the distance and you’re hunting it down.

You know how it is: you’re just casually minding your own business, hanging about in Seville, and suddenly the street is full of Romans. 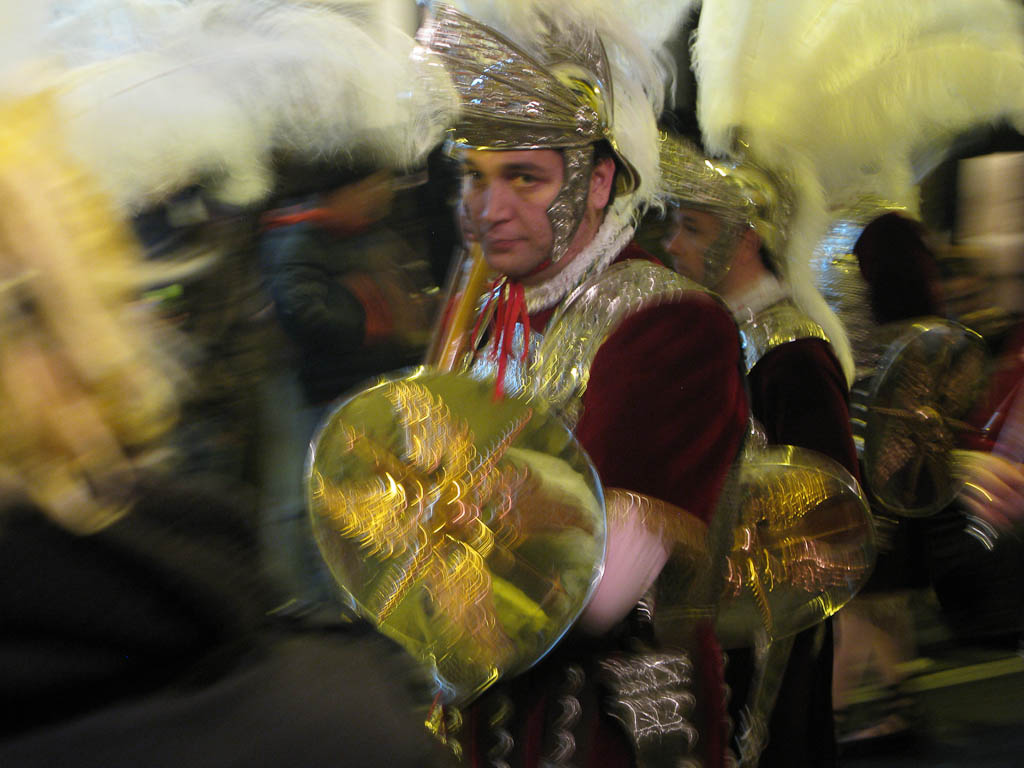 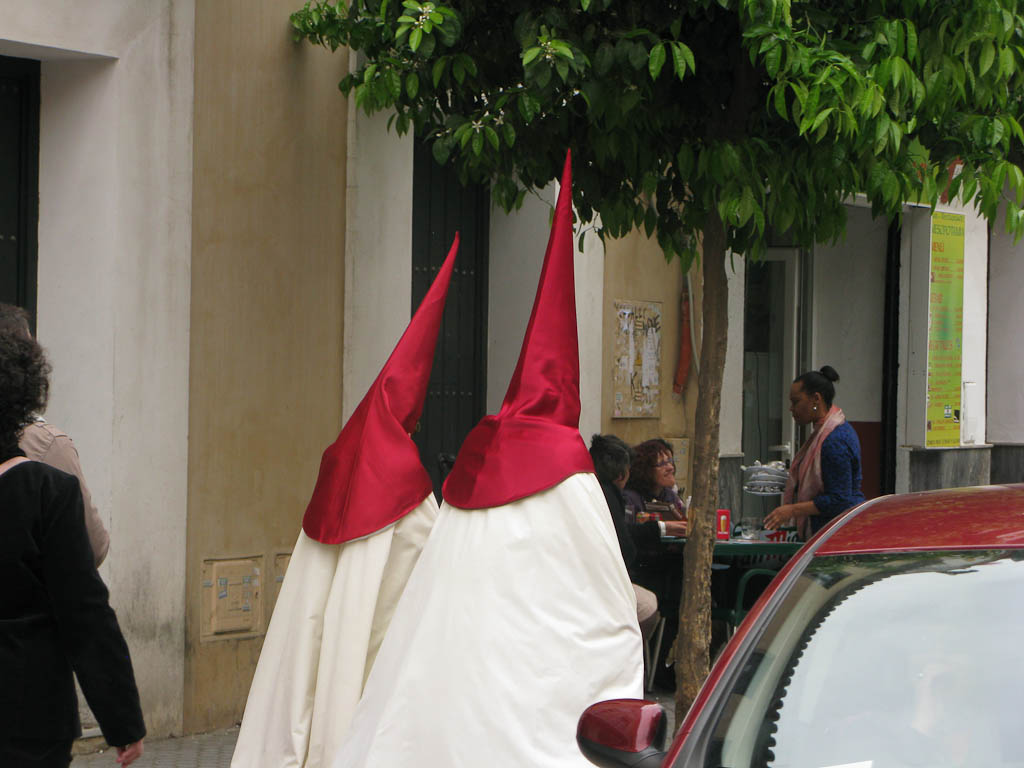 23. Being in a café when a procession comes past

In fact being anywhere when  a procession comes past. 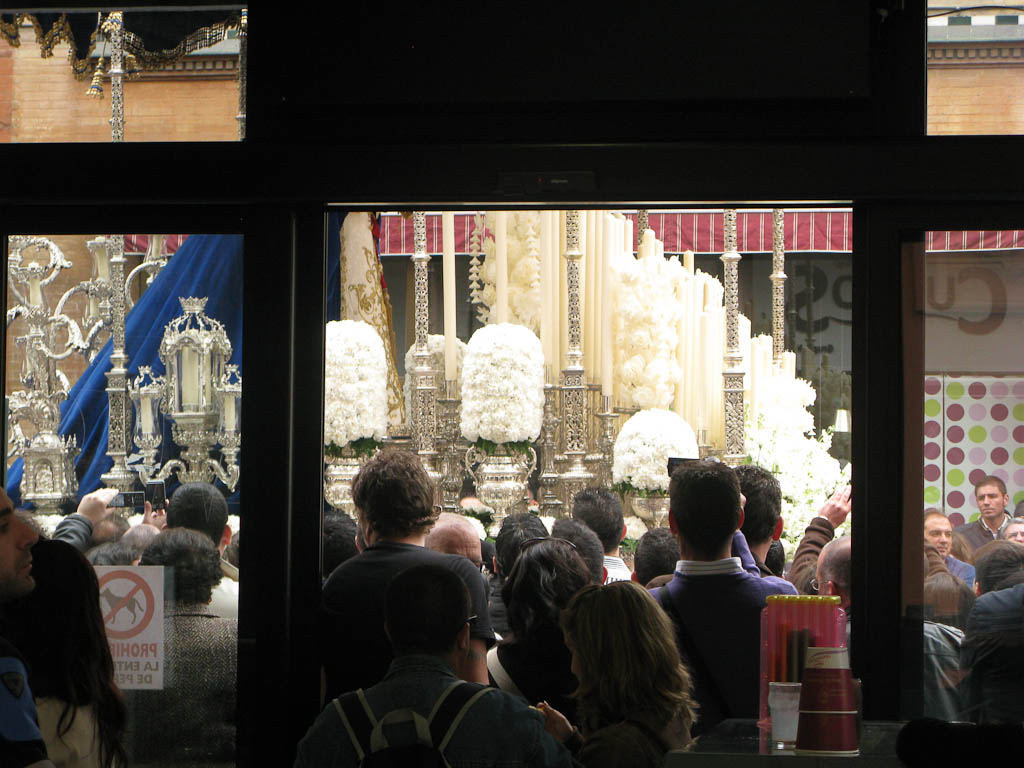 24. The beauty of Seville as a backdrop. And frontdrop. And sidedrop.

Seville has a kind of casual, lived-in beauty. This photos is not even of a touristy bit. This is just regular Seville – Calle Feria where I used to get my breakfast. On the subject of which…

25. Taking breakfast on the street

One of the great things about Seville, and southern Spain in general, is getting ready for the day eating pan tumaca – toasted bread rubbed with garlic, drizzled with olive oil, and finished off with pulverised tomato, and maybe a slice or two of jamón ibérico (Iberian cured ham). 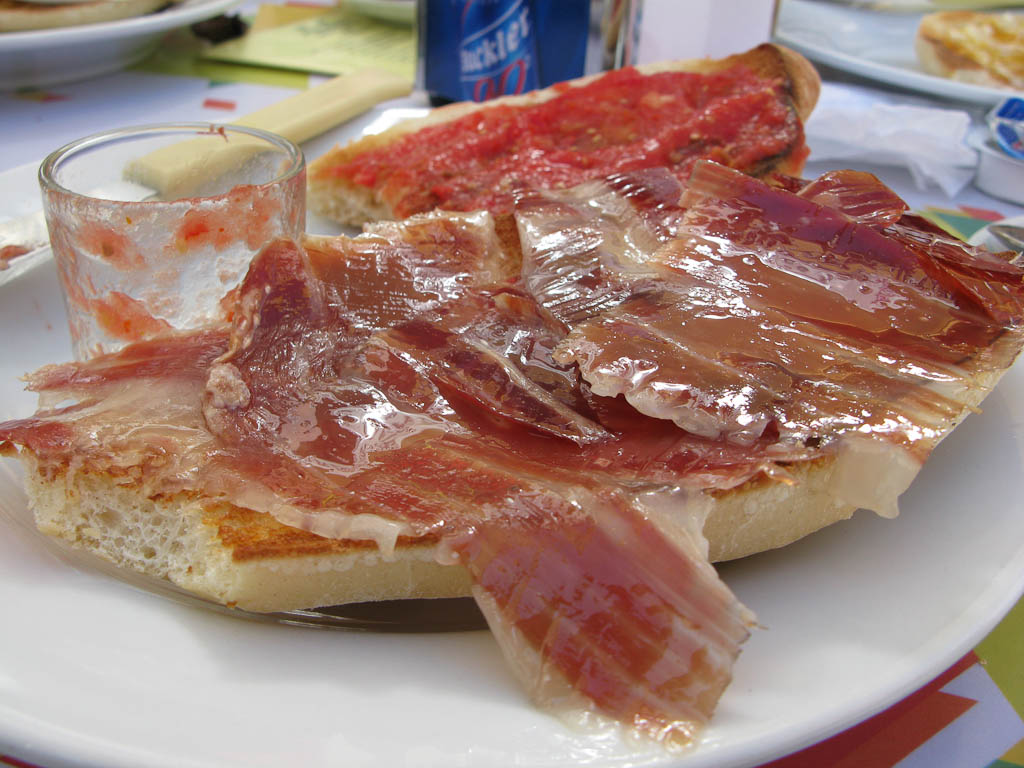 I know it doesn’t look up to much, but this dessert – milk -or wine-soaked bread with honey and spices – is pretty great, especially with a nice, strong café con leche. 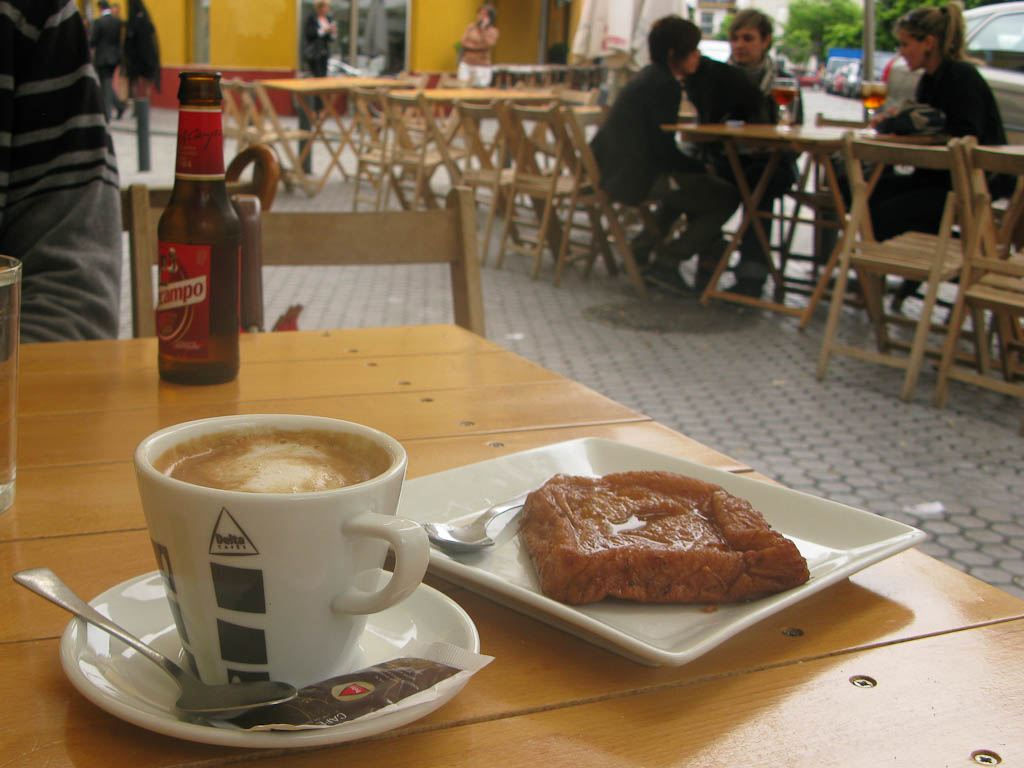 All the processions make a beeline for the Cathedral – La Giralda – one way or another, and it’s a fabulous sight in it’s own right. 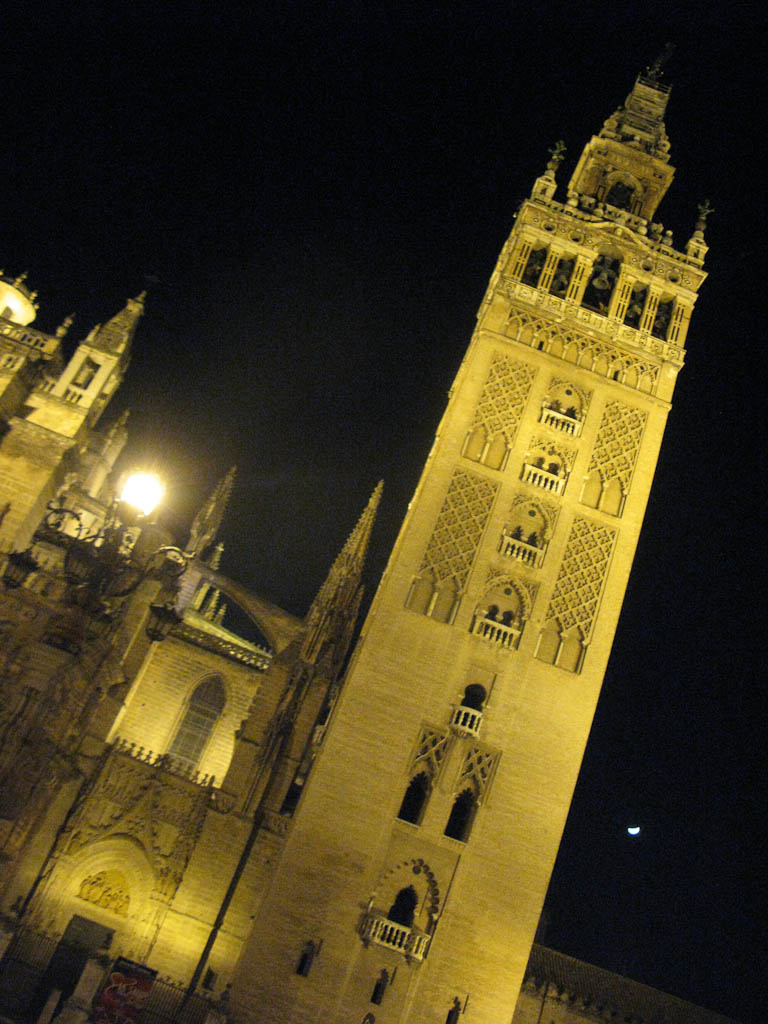 Getting up high out of the crowds is a popular pastime. People rent out flats on the processional routes just for this reason.

There must be times when they’re thinking “I might just climb aboard”. 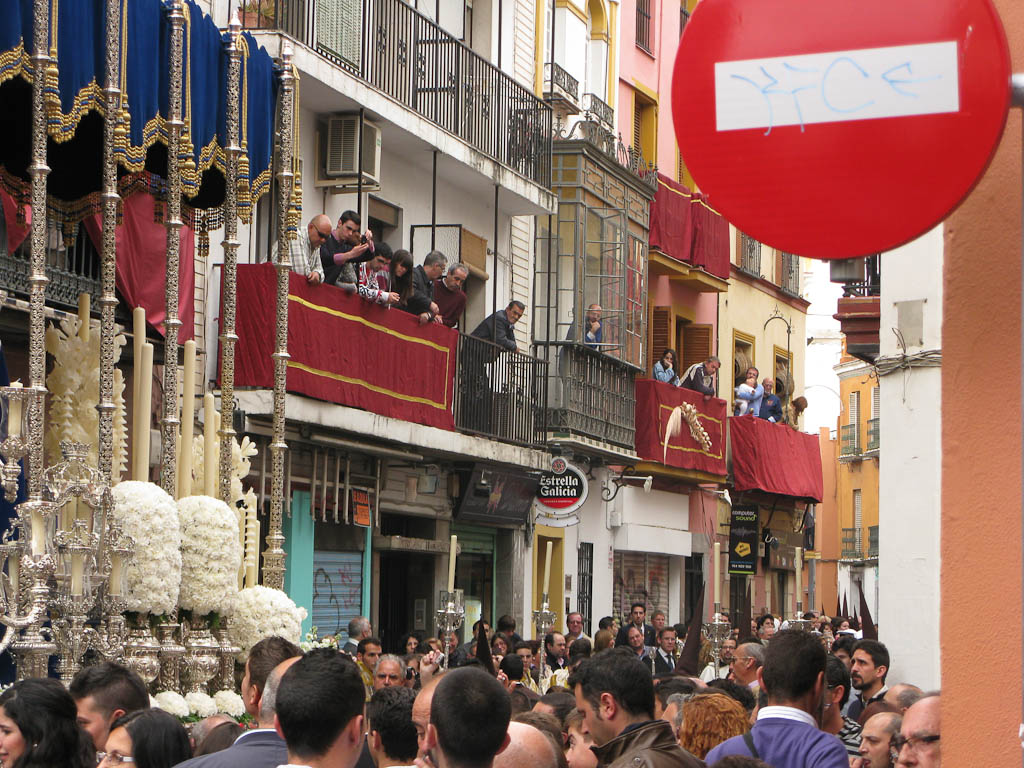 29. Mary arriving alone in silence and near darkness

You’ve spent the whole week seeing processions pass by with (almost always) two pasos – one featuring Jesus, and one with Mary. Then, on the night of Holy Saturday, the penultimate procession arrives at Plaza de San Lorenzo around midnight in near darkness and total silence. There is only one paso – that of Mary. 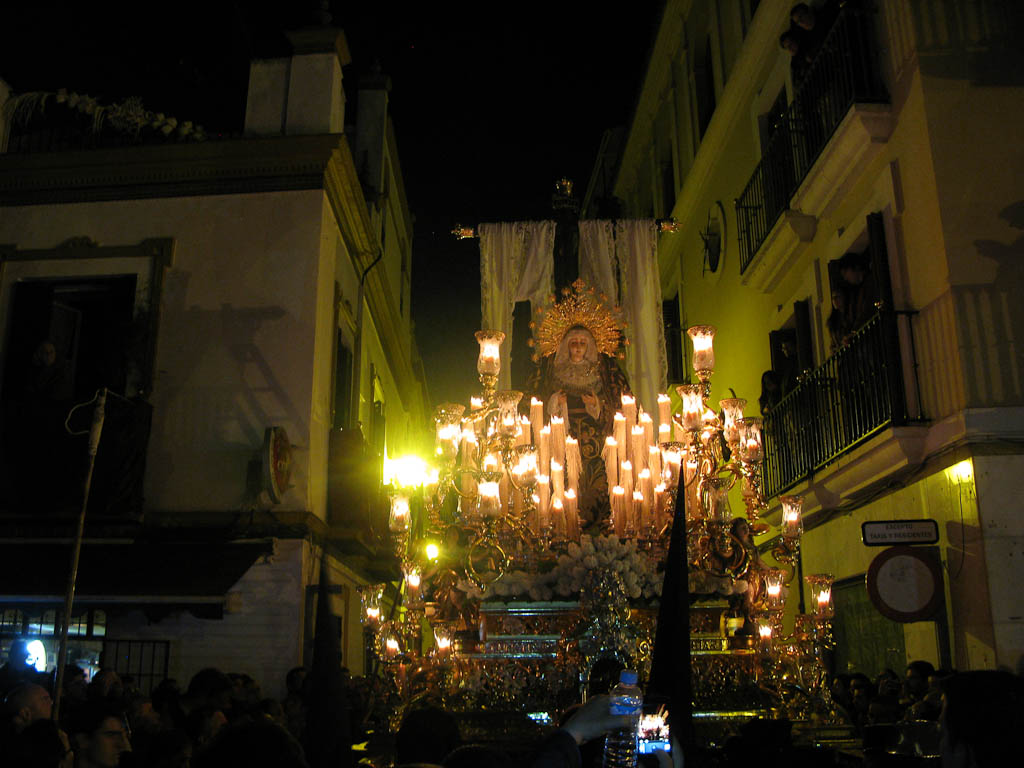 It can be a profoundly moving experience, even if you’re not religious.

30. Not being able to go where you wanted to go for half an hour because of a religious procession

Your girlfriend lives just the other side? You were just nipping out to buy some bread? Rushing back because you left the gas on? Unexpectedly being unable to get somewhere for ages is all part of the fun. 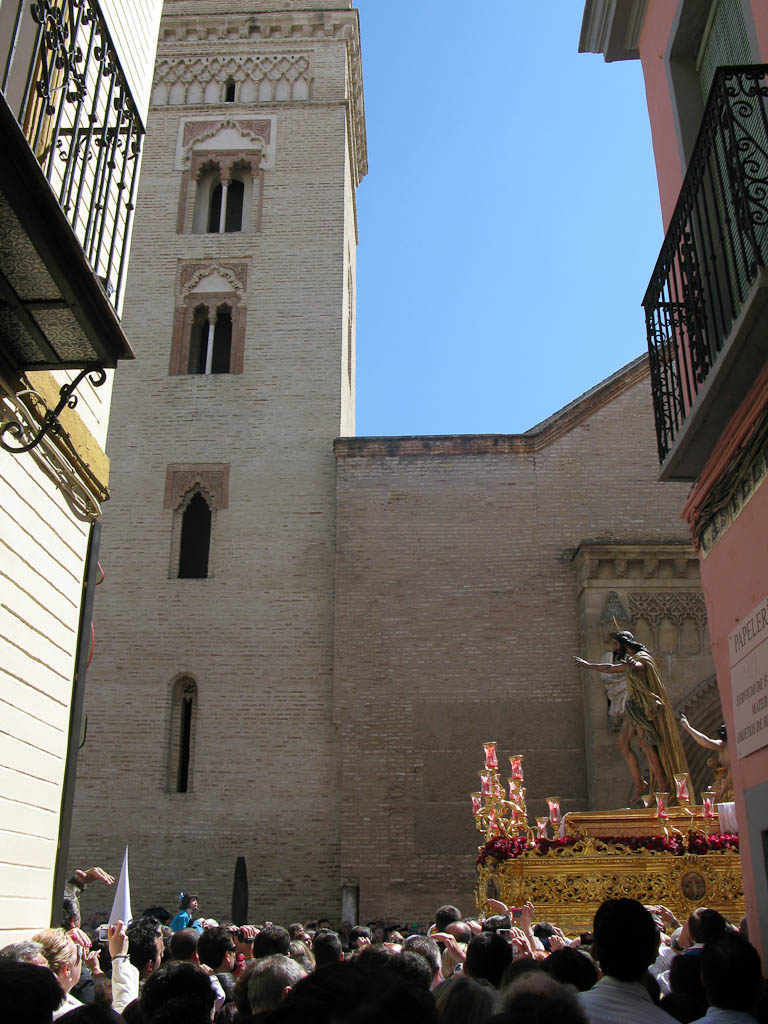 31. Experiencing one of the world’s great spectacles

Going to Seville at the same time as everyone else is going to Seville is a pain in the proverbial. Sorting out accommodation, getting about the place and everything else can be less than fun, too.

But it’s worth it. It really is. 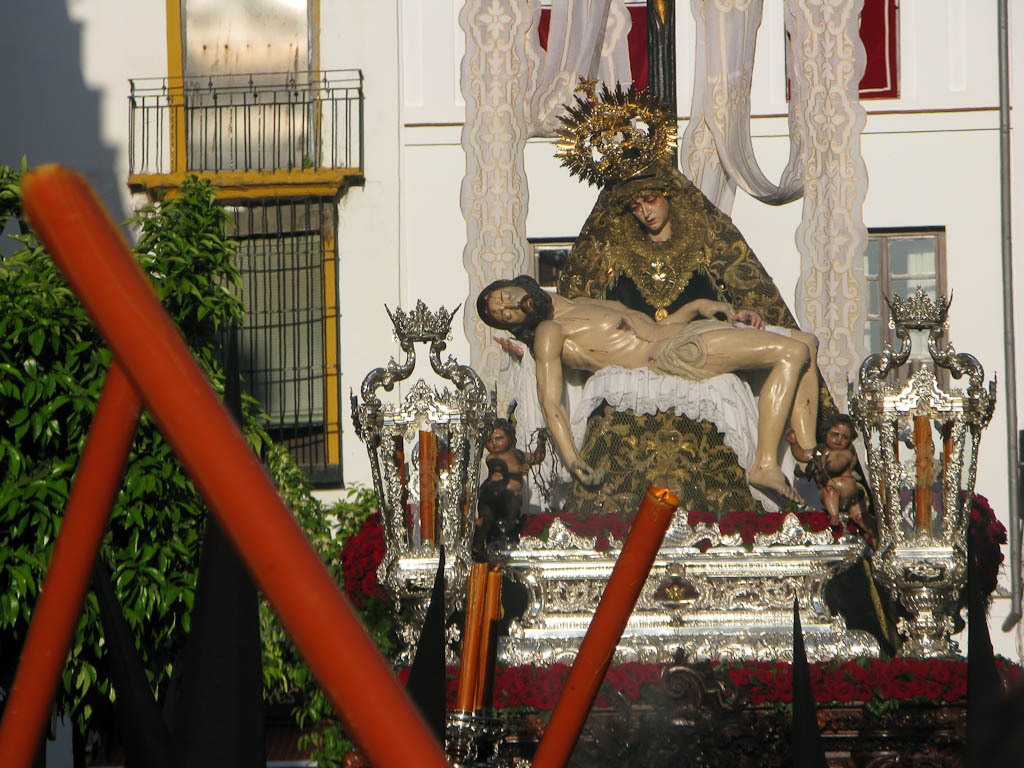