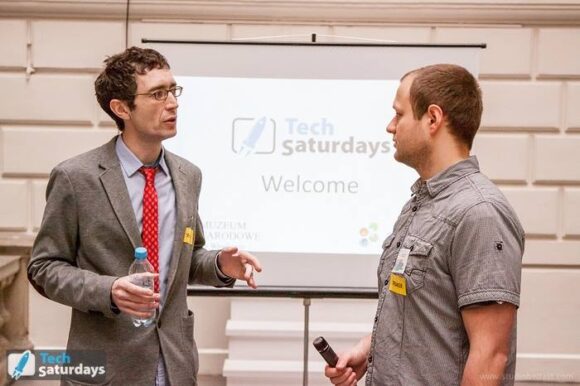 How to Give a Terrible Pitch in 23 Easy Steps [VIDEO]

I recently gave this performance at the Tech Saturdays startup event in Wroclaw, Poland. They wanted me to do a deliberately bad pitch as a way of showing people some of the things to avoid.

Doing a deliberately bad version of anything is great because you can claim any genuine errors are intentional. Mind you, I tend to do that in life anyway.

My experience is in public speaking rather than pitching – I’m the host for TEDxWroclaw – so I needed the help of Tech Saturdays organiser Dermot Corr (to whom I must give a co-writing credit for the script). For the purposes of this talk, I created the fictional character Dr Simon Chancer, which Dermot then fleshed this out with this rather sterling biography (which I’ve edited to fit):

Simon has a photographic memory, an IQ of 267, can cook, likes dry or light beer, and microwave popcorn.

He also knows several kinds of martial arts such as Judo, Karate, Muay Thai, and Taekwondo, and has been afraid of heights since he was 9 years old.

Simon speaks 7 modern languages including English, Spanish, French, Russian, German, and Japanese, but not Italian or Hebrew. He knows four dead languages, including Egyptian hieroglyphics. He has won a Nobel Prize field unspecified, but probably for physics. For this, Time magazine called him “the next Einstein”.

(Any similarities between the fictional character Dr Simon Chancer and any real-life person are entirely coincidental, and would actually be rather annoying for everyone concerned. We don’t want that.)

23 Steps  to a Terrible Pitch

1. Arrive late [0:12 in the video]
Great start! I actually had the host call for me several times before I turned up, flustered, but the editor cut out the slack time because waiting for someone on video is even more tedious than in person. Even if (like me) your relationship with clocks is loose at best, get there early.

2. Blame others [0:14]
Hooray! We’ve had a breakdown in communication, but instead of brushing over it let’s draw attention to it. In fact: Let’s air our dirty laundry in public!

3. Read your talk from cards [0:25]
This is such a cheesy gag, but hopefully it makes the point. If you want to look unprofessional, read straight from cards. Using cards as a cue isn’t so bad in some circumstances – time scales may demand it – but if this is a pitch, then why haven’t you memorised it? If your pitch is not important to you, why should it be important to potential investors?

4. Don’t check the equipment in advance [1:10]
It’s so exciting not knowing whether the clicker is going to work! (The dancing about is because of the built-in laser pointer). There are many different technical risks, and you’ll never discount all of them, but you have to do what you can to minimise them, which means rehearsing using the exact set-up in-situ if at all possible.

Case in point: when I turned up to do this performance, the laptop had the old version of my slides on it. These things happen. Fortunately, I’m a smart arse and I brought along a USB stick with the latest version on, so we were able to fix it. You can’t cover ever eventuality.

5. Use bad fonts [1:22]
Okay, so anyone using Comic Sans these days is probably being ironic. But getting your typography right is still important.

6. Use as many buzz words and clichés as possible [1:26]
Yeah, chuck ‘em all in there. That’s what gives people confidence – the notion that you’re clinging to some novelty terminology.

7. Use bad graphs [2:29]
Take an over-complicated graph that someone else made but that you don’t understand and let’s see how that goes. Then switch to an oversimplified one.

8. Say ‘um’ and ‘er’ a lot [2:31]
Here I’m doing it to emphasise the fact that I don’t know what I’m talking about. But you often only realise how much you say ‘er’ when you watch a video of yourself. It’s a habit, and takes a conscious effort to break.

9. Gloss over problems [3:26]
If there are obvious and glaring problems with some aspect of your product, it’s much better if you point them out yourself than leave it to an outsider to do it for you. That way you can address them on your terms.

10. Leave your phone switched on [3:38]
I don’t seriously imagine many people would have a phone conversation mid-pitch, but the whole ‘turn your phones off’ thing applies to everyone. Unless you’re expecting a call from your ‘bunnykins’ in which case go for it.

11. Read from your slides [4:15]
Any slides you have should complement what you’re saying, not act as notes. They certainly shouldn’t be a word-for-word reproduction of your pitch. And it’s one thing to check that the right image is up, quite another to turn your back to the people you’re addressing.

12. Make unsustainable assertions about the financial prospects [4:20]
Where did these figures even come from? And what makes this guy think that because something works for Twitter then it will work for our product? 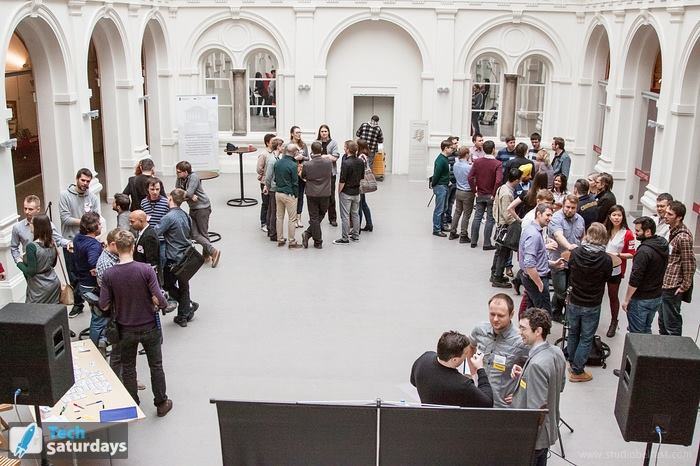 If you’re going to give a terrible pitch, you may as well do it in a beautiful venue (the National Museum in Wroclaw)

13. Overrun your time slot [4:51]
This goes back to rehearsing. Find out how much time you’ve got, and stick to it. Practise, time it and refine it. There’s really no other way.

Questions from the panel

15. Don’t think about what you actually want from investors [5:46]
Just pull some random number out your backside – that’s fine.

16. Act like you deserve their money [6:10]
Yes, all you need to do is work hard and random people will give you money. That’s how it works, isn’t it? The world owes you a holiday!

17. Use a meaningless logo you just found somewhere [7:06]
“It creates apprehension! I mean a buzz!”

19. Make no attempt to find customers [8:38]
And make out like this isn’t important.

20. Give the investors advice [8:40]
Free advice! Who could possibly not want that?

21. Refuse to reveal your idea [9:50]
As a writer, I understand this. You’re investing so much in something that you want to protect it until the last possible moment. And ideas do sometimes get stolen. But in most cases there comes a point where you simply can’t move on until you’ve had the courage to put it out there.

Karol Gajda takes it even further:

There are myriad reasons why nobody cares about your idea and why they won’t steal it.

Here are a few:

1) Your idea is a horribly bad idea.
I know, I know, you love your idea! But it’s possible it’s bad and you’re fooling yourself. Most ideas fall into this category.

2) Nobody understands your idea the way you do.
You’re special. That’s why you came up with your idea and nobody else did.

4) People are lazy.
This is a big one. Success does not come easy. Even with a good idea. People won’t steal your idea because they’re simply too lazy to do anything with it.

23. Use a sales ploy to try and get investors on board [11:20]
The assumptive close does exist, but that isn’t how you do it.

So there you go – that’s all you need to give a very bad pitch, or even a very bad talk or presentation. Go out there and give it your worst.

Have you ever given a bad talk or pitch? What did you learn from it? What advice would you give to someone looking to give a truly awful talk or pitch?

← Theodore Roosevelt
Into the (Slightly) Wild – Hiking in the Owl Mountains →