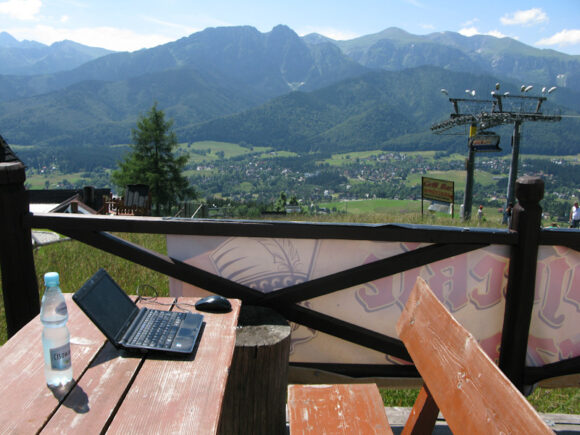 Things To Do in Zakopane when Your Neck Is Cricked

I was so happy to have arrived in Zakopane, the resort town in the Polish Tatra mountains. Well, at least until I tried to get out of bed on that first morning.

I’d needed to get out of the city for a long time and it’d been ages since I’d been out hiking. I was really looking forward to stretching my legs, my eyes and… I can’t think of a third thing. Well, maybe my written lists of items (from two to three).

I got all my stuff ready to go hiking the next day so I could just get straight up and go. But then I got up in the morning at 7am – or tried to – and my suddenly my plans resembled a kicked-over cairn.

Sticking your neck out

I’m not even quite sure what I did. There wasn’t even a creak, crack or clunk. One minute I was rolling about a bit, the next I was trying to sit up in bed and failing. The next few minutes after that were spent trying to work out how to leave the bed at all – you really have no idea how much of your upper back and neck muscles are required to get up from a lying position until you try and do it. Or until you study musculature, I suppose.

By the time I managed it, it was very clear I had a cricked neck. Or a stiff neck. Or a wrenched neck. Or a wrecked neck. Whatever the adjective, I couldn’t straighten it, and that’s quite important to me. To paint a picture, when standing up straight, my head and neck departed at a slightly comical (to anybody else) 20 degree angle. Any attempts to twist, tilt or straighten it resulted in a lot of pain and no apparent gain.

First I did that ‘Why?’ self-questioning thing for about five minutes. I don’t get many cricked necks but I was still really quite annoyed that the department responsible for distributing them out had chosen me as one of the recipients.

Was it due to awkward posture? A badly packed backpack? Or was it just my turn for one? It didn’t really matter in the end, because that was my new circumstance, and I just had to accept it and move on.

You very quickly work out the things you can’t do, because your neck is an excellent communicator in such circumstances. This is my far-from-exhaustive list:

Damn it. That was the main reason I came to Zakopane in the first place. But there were smaller, more annoying things still to come. 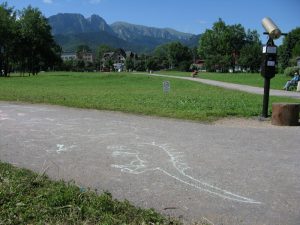 A park in Zakopane – the limit of my hiking ambitions

Getting thrown about on a coach for x hours didn’t seem wise, especially when I wasn’t entirely sure what was wrong with me, so I was stuck in Zakopane.

Despite how frustrating it is when you get all the buildup and no sneezegasm, I was in genuine fear of what might happen if I did.

4. Dry hair with both hands

Yeah, that’s quite annoying. One hand at a time will have to do.

Oh look, this is getting ridiculous.

Tell me about it.

But what could I fill my day with if I wasn’t able to hike, or leave (or sneeze, or hang around drying my hair with both hands)?

Things you can do in Zakopane when your neck is cricked

1. Research ‘cricked neck’ on the internet

Apparently, there was probably little wrong with me despite the peculiar stuck-forward nature. But would I be like this for a day, a week or a month?

If my neck hurts it’s because I’ve got a neck. Also, I’ve got a mouth I can whinge with and fingers I can write self-obsessed blog posts with. There’s a lot more right than wrong.

4. Walk round very slowly with your neck stuck forward at an angle

This turned out to be my main activity.

So it’s not exactly hiking Rysy, the highest peak you can ascend on the Polish side of the Tatras without a guide, but there are worse things in life.

6. Hang around at a hilltop café

You can also take one of those ‘look where I’m working’ type photos in lieu of doing some actual work (see the featured image for this post).

7. Ponder on the superabundance of nuns

There was a surprising number of nuns in Zakopane. 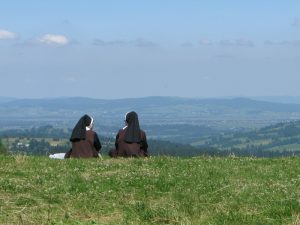 Some nuns, who may or may not be on the run.

8. Listen to how great the hiking was today from the other hikers

9. Go to the hospital

One of my fellow hostel-dwellers seemed to know a lot about body injuries on the basis of experience. Indeed he reeled off a list of about eight, whilst leaving the (seemingly singular) cause of them tantalisingly unsaid. And in his non-medical opinion, my neck wasn’t going to get better on its own.

I fully expected to be surrounded by people in ski-gear with the legs bending the wrong way, or the new-found ability to kiss their own elbows (an important skill). I wouldn’t be able to hear myself think for the cumulative sound high-tech impermeable fabrics swishing against each other. That and the whine of somebody explaining their injuries in such a way that made them sound more like James Bond skiing off a cliff than a holidaymaker skiing into a tree.

In fact there were no skiers there at all.

Someone would later point out to me that there are a lot fewer skiing accidents in summer than winter because there is no snow on the mountains. Which is funny as you’d think that would make skiing more dangerous, not less.

Instead of broken skiers, the emergency room was full of locals with everyday injuries. It was like a mini community centre. To start off with, some guy was in there with his girlfriend. Then another couple came in and they greeted each other. Then in trotted a middle-aged bloke and his kid, to which one of the people already there came up to see how little whatever-his-name was doing. And so on.

After a bit of a wait I got seen to.

No problem, said the doctor. You’ll be better in a few days. Rub this on your neck and swallow these. Yes, definitely that way round.

That evening I got a great night’s sleep. And when I woke up, to my amazement, I’d regained the ability to straighten my neck. I wasn’t quite ready to balance a car on my head, but I was a lot better than I had been.

Things to do in Zakopane when you’re better

Have you ever sustained a mystery neck injury? What could or couldn’t you do as a result? Did you write a self-indulgent blog post on the subject?