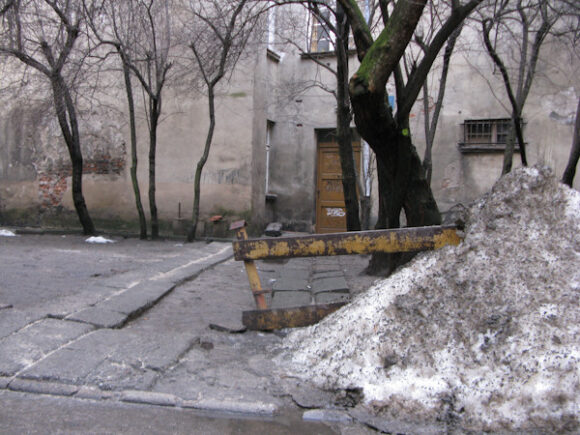 It started as a slow dripping sound a few days ago. I was in the central, perspex-roofed atrium of the hostel and whilst the noise was clear the source wasn’t.

“What’s that?” asked one of my fellow guests.

“Must be the boiler” he concluded.

Now, a day later, it’s a constant rain-like drumming, and it would appear to be melt water from the snow on the roof. It’s just a few degrees warmer in Wroclaw but it’s enough to generate this pseudo-rain effect.

I like the sound of rain. I find it curiously relaxing. Well, so long as it’s outside and I’m inside. Or vice versa, although that tends to happen a lot less. But as I sit there working at my desk it’s actually loud enough that it’s affecting my ability to write. Not only that, but it’s jarring with the music I’m playing (Les Revenants by Mogwai).

It’s also very confusing for the part of my brain that deals with weather (the cumulo-campus) as there isn’t the slightest hint of rain out the window – just a snow-covered plaza.

*Mumbles “If I wanted the sound of drumming rain, I’d have installed a ‘drumming rain’ app”*

Out on the streets though, the melt is even more evident. The dry slush has gone, replaced by its less-attractive sibling, wet slush. Walking has taken on a wet gritty crunch, even a sandy rasp, and the peculiar phenomenon of ‘puddles’ has appeared. As has that of me doing particularly unmanly jumps to try and save my non-waterproof shoes from disaster.

There’s a danger here, too – those steeply-slanted roofs in the old town mean that snow likes to eject itself sooner rather than later. It comes hurtling off the buildings in great flurries and lands on the pavement, causing a genuine hazard to anyone not in an armoured vehicle.

Hats and gloves are being discarded – not right there in the street or anything crazy like that, but in general. Some folk are even opting for the rebellion-like open-fronted jacket look.

Soon the snow has diminished to the point that the once-fluffy landscape is scarred with dirty lumps of ice, with a coating of black grit and cigarette ends. It’s just generally not as nice.

People are telling me it will probably get cold and snow again before it gets warm, but it’s still a sign of the approaching spring. The weather is changing, and doubtless my relationship to the city with it.