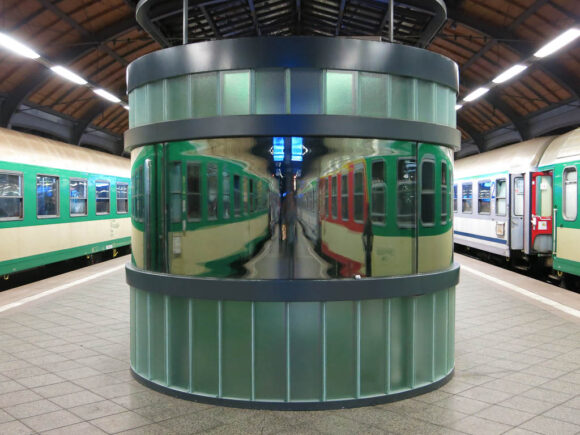 Wroclaw to Gdansk is nearly 400km as the crow flies. The crow doesn’t offer a sleeper service, though, so I’ve decided to take the sleeper train.

I could take the plane instead, but I hate the fact that we’ve become so blasé about flying. And I could take the day train – that way I could get some work done. After all, it’s only a 7 1/2 hour journey. But I must admit to finding the idea of sleeper trains quite exciting, even if the whole point is you miss the journey because you’re asleep the whole time.

Assuming you’re not me, that is.

In fact, speaking as an insomniac, I don’t even know why they call them sleeper trains. They should call them lying-down-and-repeatedly-turning-over trains.

At the relatively new and heavily castellated Wroclaw station, I find the platform, no problem, and I even locate the train. What I can’t find is the carriage with the expected number on. Also there is a large group of people waiting in empty space on the platform. These two pieces of information come together with a mechanical clunk as the missing carriages are shunted onto the end of the train and people start to board.

The attendant waiting at the carriage door takes my ticket clean off me. He tells me he’ll give it back to me in the morning once I don’t need it any more. At least I think that’s what he tells me – I don’t speak much Polish. For all I know he’s actually said “I’m going to sell your ticket to someone else, and you’ll have no proof it was ever yours – how do you feel about that?”

I climb aboard and go to find my bed. Then turn around and go back to the attendant to ask my bed number, which is on the ticket. 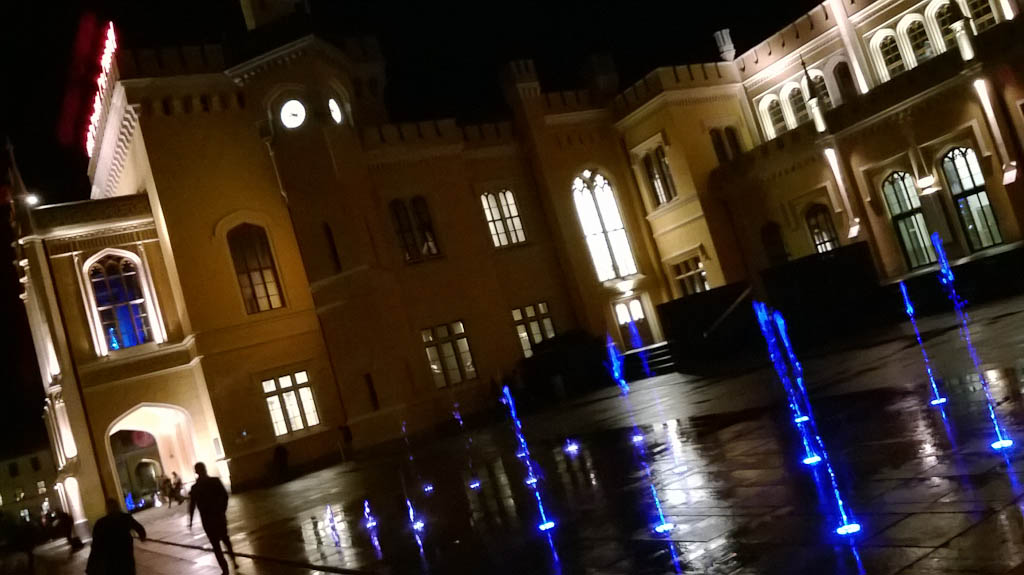 There are a whole host of different options of overnight accommodation, from the simple seat to your very own compartment. The 6-bed couchette seems like a common choice, but I’ve gone for the 3-bed sleeper compartment for 150zloty (28GBP / 36EUR / 45USD) all in.

The compartment is quite small and not suited to much else than, well, lying down with your eyes closed. The most obvious feature are the three made-up beds along one side, one above the other. By made-up I mean they have bed sheets on, rather than they’re happy to see me or are wearing makeup. Opposite the beds is a ladder for getting up onto the precariously-high top bunk. And in the corner is a fitted table with a flap that lifts to reveal a little sink.

I’ve pre-booked the bottom bunk so I can get up out of bed guiltlessly if I’m sleepless, instead of being stranded ten feet up, wondering if my neighbours will be awakened by the sound of my landing in a crumpled heap on the floor. This turns out to be an especially good choice when I discover that the distance between the bunks isn’t great enough to sit up, so it’s not like you can prop yourself up and read if you can’t sleep.

But then we’re on a train not a hotel, which means there’s less space, and also means we’re about to start moving pretty soon.

On which note… we’re away!

We’re reversing back into the station!

We repeat this process several times, hopefully due to the addition of yet-more-carriages, or a new engine, and not because the person in control is learning to drive.

Finally we pull away – this time in the opposite direction – and keep going. We’re en route to Gdansk.

I’m not the only person in the compartment – another guy got on at Wroclaw and has booked the middle bed. He parks his wheeled suitcase on one side of the ladder and hangs his jacket on a vacant hanger above.

I must don’t feel very comfortable about the baggage situation. I don’t like the idea that it could get off at an earlier station that I intend to. Who knows what someone could steal from the compartment whilst I’m kidding myself there’s a chance of sleeping?

Then there’s there problem of pocket stuff. What do you do with your money, cards and so on? There’s a little netted pouch on the wall above each bed, but you’re still putting your trust in the other people there – there’s no getting round that. One answer is to sleep with one eye open. Or just do as I’m likely to do and stay awake the whole time anyway.

For peace of mind I padlock my bag to the nearest functional thing – the ladder – before getting into bed and closing my eyes, hoping the train’s gentle rocking will have a soporific effect.

Then we pull into some little station and I have to scramble out of bed and undo the padlock because the third passenger is here, and he needs to use the ladder to get to the top bunk. I decide to put plan B into action – give less of a shit – and get back into bed. 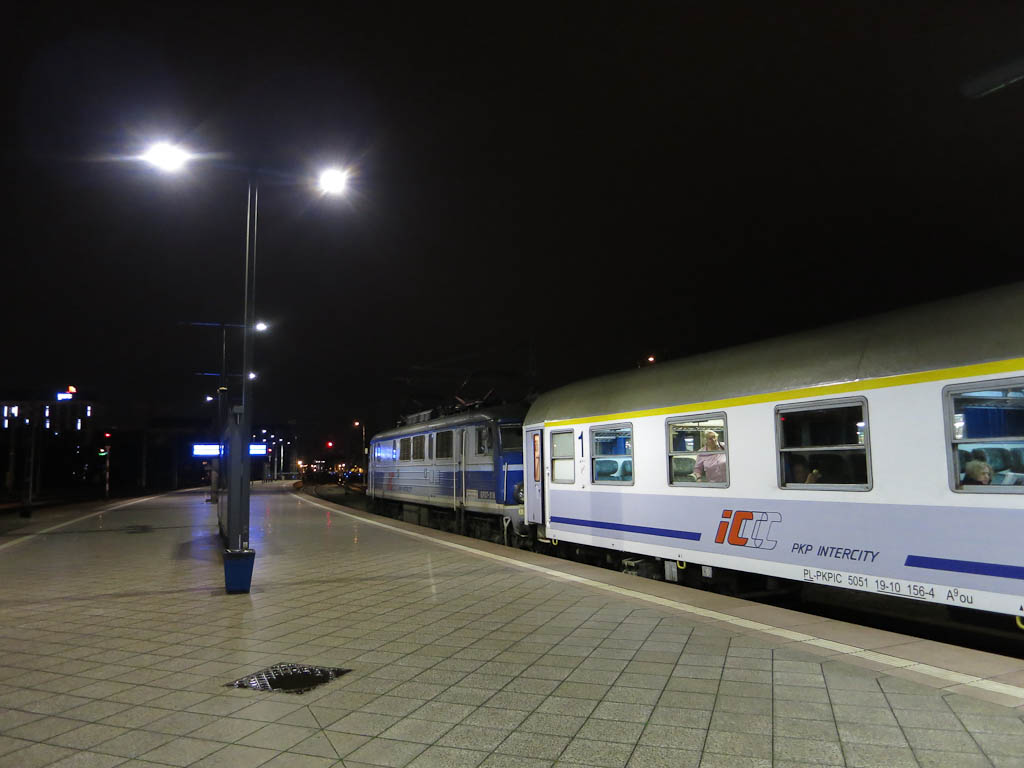 Which brings us to the next conundrum – clothes. What is the protocol on a sleeper train? Do you sleep as you are? Do you half undress? Do you parade about in lingerie in front of your fellow passengers?

NO-ONE TELLS YOU THIS STUFF.

I don’t want to sleep in clothes – that just means I’ll arrive at my destination feeling like I got leathered and crashed on a mate’s sofa (which as someone who gave up drinking some years ago would at least give me a hit of nostalgia). Beside, the sleep compartments are same sex, after all, and what’s the point of having bed covers if you’re just going to kip in all your clobber?

However, I don’t know what the situation is, and I don’t want to break protocol. It would be unnerving for the other people in the compartment, and for me it would be too much like one of those dreams you have where you find yourself at work in your underwear.

“That’s no dream!” says everyone who works from home.

I notice that the guys in the other two bunks get up and down in shirts and jeans. Does this mean that they’re sleeping in them? Or did they just wriggle back into their jeans before getting down, like a crab re-inhabiting a discarded carapace?

I really don’t know what the answer is here, but I’m going to request that someone invent train-jamas – special pyjamas designed to look like you’re wearing jeans and a shirt. Unless that’s what they were actually wearing, in which case smart move, gentlemen.

I don’t know why I’ve called this section sleep. This is the part of the journey where I lie in bed for several hours rolling about trying to block out the blue lamp – presumably a safety lamp – that is permanently switched on.

Did you know that the blue light emitted by screens on electronic devices are known to have a negative effect on sleep? I don’t know if this frequency of blue is implicated, but it still wouldn’t seem like a good choice of colour for a safety lamp in a sleeping compartment. Or perhaps it’s an excellent choice – you’ll be much more alert if you’re permanently sleepless.

It is probably necessary though, as there’s certainly no outside light coming in – the window has a full-on blackout screen over the top of the privacy screen to deal with that.

The bed itself is fine; comfortable. The sheets are clean and pressed, with a pillow and a duvet, the mattress, or whatever you can call it, is comfortable, and the whole ensemble is long enough for a 6’1” (185cm) tall man like myself. It’s also wide enough for an insomniac to have some room to repeatedly turn over, as though this time is the time that will have the desired effect.

When that gets tedious (which it does very, very quickly), one can always head to the bathroom and play ‘find the button that operates the tap:

I don’t know why I claim you’d never work it out, when I clearly did exactly that.

Eventually – somehow – I do actually drift off. I’m not really sure how many hours I sleep, but anything is better than nothing.

My initial fear was that I might wake up and miss my stop of Gdansk, knowing that we were due to arrive there at 7am. For that reason I actually booked my ticket all the way through to Gdansk, In the event I needn’t have worried – the carriage attendant strides the corridor booming out a good morning message with a frankly inappropriate level of cheeriness, and there would have been no sleeping through it. Everyone makes a beeline for the end of carriage bathroom, and there is some face-splashing from the sink, and then we’re all fresh and ready to start our days (ha!). 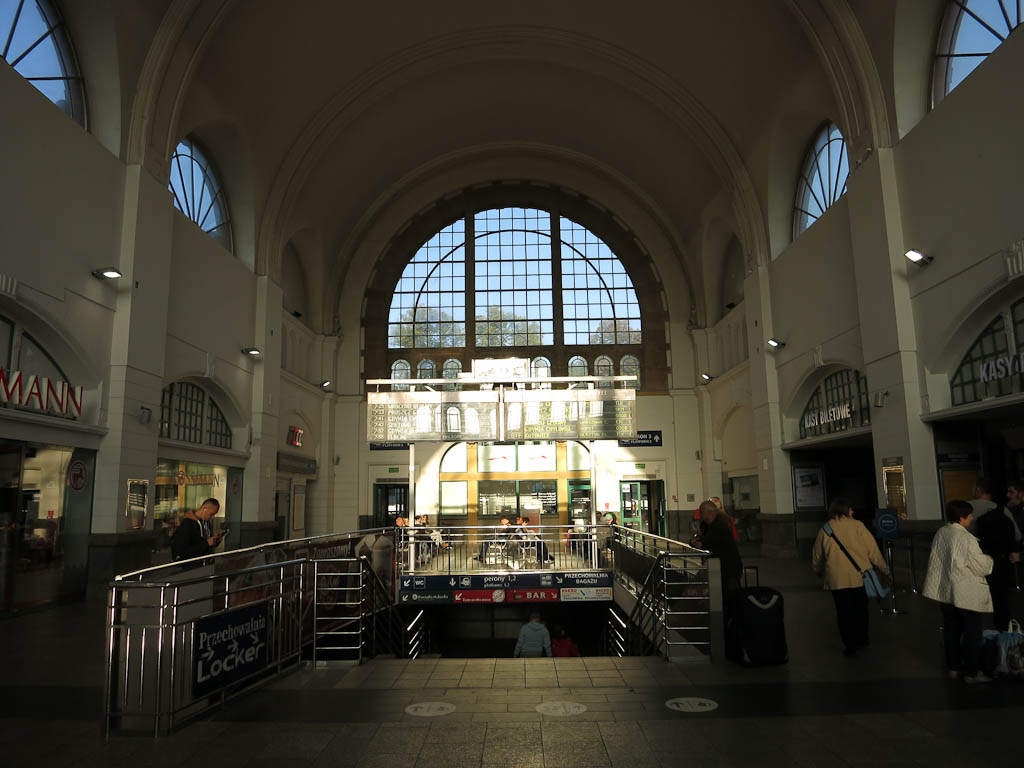 I alight at Gdansk Glowny train station feeling like kind of rested, albeit not entirely quenched. And knowing that I still feel better than had I been on a coach, which is like spending the night in a tumble dryer.

I still don’t know why they call it a sleeper train, though.