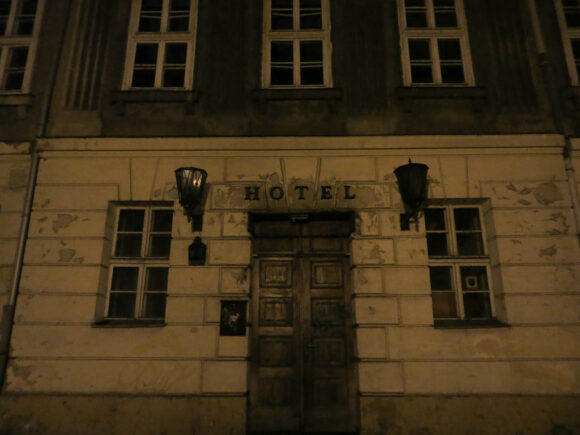 Come to Innsmouth! See the Shadow Over It!

It’s the best travel book I’ve read in ages, and it’s not even a travel book.

I first heard of The Shadow Over Innsmouth – the novella by HP Lovecraft – years and years ago. I’m pretty sure it was in a description someone wrote of the first-person sneak-em-up Thief, the latest incarnation of which, coincidentally, is released this week. But it took me until last year to buy a copy of the Lovecraft’s story, and until just the other week to finally read it.

Why? Well, I just don’t like horror. I think it’s the problem with having an active imagination – the ideas persist long after the book or film is over. It’s like one of those things that ‘cannot be unseen’. Not unlike with these ducks (to quote one reddit user: “You have just ruined ducks for me”).

Even after watching Walking Dead I end up having zombie-based dreams. I had one recently featuring the zombie equivalent of Colombo – I was pretending to be one of them, and he kept trying to catch me out with clever questions (memo to self: future book idea – ‘The Zombie Detective’).

The thing that ultimately drew me in was that it was apparently about some dilapidated town with creepy goings on. That was the hook. I think it taps into the sense of exploration, mystery and danger. Also perhaps my former obsession with first-person-perspective games set in dilapidated towns with creepy goings on. But let’s conveniently gloss over that and focus on the sense of exploration.

Reading the book, and walking in the shoes of the protagonist, reminded me of the prep for my first big trip away (New York to Buenos Aires). I had a copy of Lonely Planet’s South America on a Shoestring which I’d flip open at random pages and just read. All the places in that book sounded exotic, and many of them I’d never even heard of before.

But the one that really got its hooks into me was Georgetown, the capital of Guyana. Specifically it was the the Dangers and Annoyances section, featuring a stern warning along the lines of, ‘Never enter the Tiger Bay area of the city’.

“Thanks Lonely Planet,” I thought. “Now I want to go to Georgetown.”

It’s hard to say why. I didn’t want to become a crime statistic – to feature in the text of the next edition as testament to why you shouldn’t – but it had that allure which comes from being dangerous and exciting.

I found myself trying to picture the place based on the crude street map in the book; to imagine what it would be like to walk through there; to picture the people and the buildings. This guy read the same section of a later edition and was inspired to change his trip as a result. And I mean to go there, not to avoid it.

The feeling it elicited was so strong that I started ignoring all the ‘cool stuff you can see’ sections and instead started treating the book as a list of Dangers and Annoyances with some annoying waffle in between. If a place didn’t have said section it suddenly seemed unworthy of my attention.

“I don’t want to go to Sucre any more – there aren’t enough stabbings.”

This despite the fact that when put in actual real life danger my reactions are similar to Richard E Grant’s character in the bar scene in Withnail and I.

Books are great for this vicarious enjoyment of danger of course. I used to love reading Fighting Fantasy books when I was a kid. The ones where it gives you options and says things like “Turn to 316 if you want to buy some armour from the shopkeeper. Turn to 149 if you just want to press his nose and make a honking sound”

I used to read them with all eight fingers jammed into different pages, pre-examining all the possible outcomes. Which with hindsight could possibly have been considered cheating. If only in real life you could use your fingers as bookmarks and  go back when you get it wrong (I’ve tried it – you just get weird looks).

The Shadow Over Innsmouth

The Shadow Over Innsmouth is about a student on a sightseeing and genealogical tour of New England in 1927 who ends up going to check out much-maligned Innsmouth. The town itself is fictional, but located in the very real region of coastal Massachusetts, near Ipswich and Rowley, and is loosely based on Newburyport. It’s a half-deserted seaport with a mysterious past, largely isolated from the surrounding towns by salt marshes. The kind of place people try to avoid and where you really might not want to walk around on your own after dark.

In that latter sense it makes me thing of San Pedro Sula in Central America. But unlike my own experience of said city in Central America, our hero doesn’t arrive idiotically late and wander around cluelessly, practically begging to be mugged. Instead he arrives, at a perfectly reasonable time during the day, then has a bit of a wander around and a chat with a drunken local. Yet somehow he’s the one that gets into trouble.

Which is good. So many places can disappoint you when you have high expectations. Imagine if you went to Georgetown and most people in the Tiger Bay area were really friendly and looking out for your best interests (which is quite possible)? You’d feel cheated. So I’m pleased to report that Innsmouth is the kind of place that won’t let you down on that front.

Like many an independent traveller, the protagonist is interested both in saving cash and seeing something a bit deeper than just the obvious spots, so he decides against the expensive option of a steam train in favour of taking the bus via Innsmouth.

“At length the decrepit vehicle stared with a jerk, and rattled noisily past the old brick buildings of state street amidst a cloud of vapour from the exhaust.”

As I started reading it, I actually thought I might just read the first chapter to get a feel for it, and then put it down. But taking a knackered old bus to a dodgy town? Let’s go!

Arriving in Innsmouth reminds me of that sense you have when you arrive anywhere unfamiliar, trying to piece it all together and make sense of the place; pondering on how differently you’ll perceive it after you’ve spent a little time there; trying to decide which cafe looks least likely to give you food poisoning.

“It was a town of wide extent and dense construction, yet one with a portentous dearth of visible life. From the tangle of chimney-pots scarcely a wisp of smoke came, and the three tall steeples loomed stark and unpainted against the seaward horizon. One of them was crumbling down at the top, and in that and another there were only black gaping holes where clock-dials should have been.”

I love that clock-dial detail.

In fact that whole paragraph just screams out ‘Explore!!!’ Although in reality if I was there I would prefer to explore it from a distance. Again like many people who partake independent travel, I like the idea of danger, but less so the reality of it. I want to be at risk in theory rather than in actuality. In fact, I’d probably be scared to walk around it using Google Streetview. I’d pity the driver that had to go that way with the Google camera van.

Fortunately, the central character is less cowardly (or more idiotic) than me, and exploring is exactly what he does:

“Some houses along Main Street were tenanted, but most were tightly boarded up. Down unpaved side streets I saw the black, gaping windows of deserted hovels, many of which leaned at perilous and incredible angles through the sinking of part of the foundations. Those windows stared so spectrally that it took courage to turn eastward toward the waterfront.”

It smelt a bit, too:

“The air of death and desertion was ghoulish, and the smell of fish almost insufferable.”

I’m not going to tell you anymore. In fact I probably shouldn’t be giving Innsmouth any publicity at all. You know what these places are like – give it a few years and it’ll be full of leathered gap-year kids complaining about the wifi and doing snorkelling trips out to the Devil Reef.

I went through my photos looking for places that I’ve seen that are a bit Innsmouth-like, and I settled on this shot of Minca below (which is nothing like Innsmouth), and the hotel in Poznan at the top (which isn’t even open, let alone a dodgy choice for a night’s stay).

If you want to read it for yourself, the book is available as web page content. You can also download the complete works of HP Lovecraft for free in a whole bunch of formats over at archive.org, both written and audio. Or you can buy this illustrated version cheaply at Amazon.

If you want to explore Innsmouth for yourself, there’s at least one video game out there that permits that, albeit with a slightly altered plotline. This is a good idea as it gives you something more to do than just wander round annoying locals (although it’s a shame you can’t do that too – call it ‘backpacker mode’).

Here’s the creepy ‘entering Innsmouth’ scene, in which the bus driver attempts to hold a conversation with you whilst storing a large piece of cloth in his mouth:

Or you could go for a wander through the dilapidated townscapes in the new version of Thief, which doesn’t contain the same number of fish-frog people, but is looking pretty cool nonetheless.

My final tip would be to listen to the excellent Welcome to Night Vale. A Lovecraft-inspired (and darkly comic) podcast based on a community radio station for the creepy town of Night Vale.

But until then at least I can say I’ve been to Innsmouth.

Are you comfortable with the horror genre? Are you more attracted to the places that aren’t safe to go to than the ones that are? Or are you the kind of person who wanders in awe through amazing cityscapes, then clicks ‘save game’ and goes and makes a hot drink?