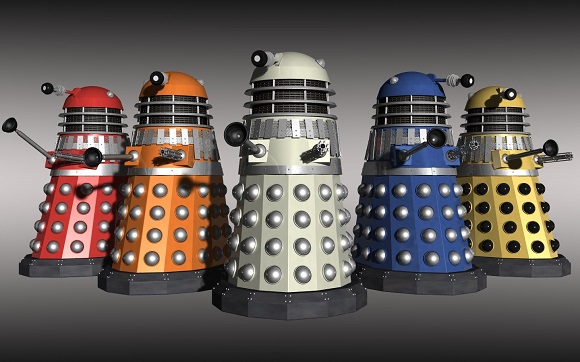 We all need habits. Whether you’re trying to become a champion Dalek-wrestler, or merely a prolific writer, you’re going to have to do the same thing again and again to get where you want.

Me too. It’s just one of those things.

I’m talking specifically about good habits, of course. I bet you’re fantastically good at making bad habits. When it comes to staying up too late, eating rubbish and browsing the internet on your smartphone whilst lying in bed, we’re mostly pretty amazing.

There’s this advice that it takes 21 days or 28 days – or something short and implausibly specific like that – to make a new habit or break an old one. I laboured under this false impression for a long time, and it was only through reading Oliver Burkeman that I realised what a load of rubbish this was.

And it should be screamingly obvious, thinking about it. Because by that logic, it would take the same amount of time to get into the habit of eating an ice cream every day as it would to get into that of a six-hour gym workout.

Beyond that, there’s a big problem with trying to install new habits.

It takes a lot of willpower and/or motivation to step away from the internet and biscuits, especially when you’ve got considerable targets to hit.

I’ve tried multiple ways of tackling this, with limited degrees of success.

Whilst living in Leeds, UK, I got into the habit of getting up at 8am every morning, then hitting the library and doing 6 solid hours of writing (which took about 8-9 hours). I did it on pure willpower, but it was tough.

A few years later, whilst living in Seville, I managed something similar again. In fact I’d have got at least an hour in before my flatmates gave me the hobbit-like summoning of “second breakfast!” and we hit the cobbled streets. 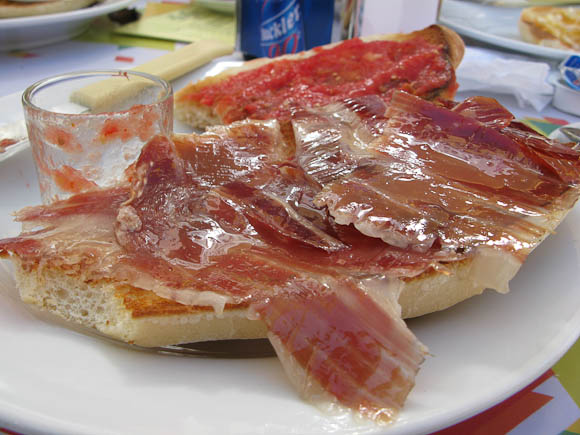 At other times, I’ve found the writing habit harder to come by. And other good habits – like switching all my tech off at a certain time to improve my sleep (the whole blue-light issue) – have often evaded my grasp entirely.

And it’s getting worse. My attention span seems to be becoming shorter – something I attribute to smartphones and social media – and my ability to build a strong routine ever more challenged.
Like pretty much everyone on the planet, I feel like I’m falling way short of my potential, and I want to address that.

So I decided to bring out the big guns and buy a book about it. And that book was the popular Mini Habits by Stephen Guise. 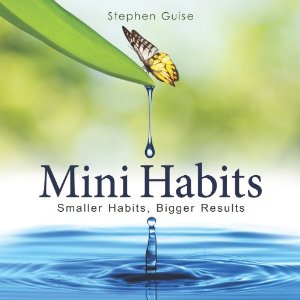 The basic premise behind the book is this: We fail at building new habits because we set our sights so high. We do this because we think ‘I really need to write 2000 words a day – so that’s the aim’. But we’re setting our goal based on the best days instead of the worst.

This is a mistake.

On some days we will lack sufficient motivation or willpower (or time, or whatever) to do it. So we fail. And then we’ve broken the chain. And then we go ‘Ah fuck it’ and start dunking biscuits.

Guise (I’m calling him by his surname, suddenly) argues that single most important thing is building the habit. And that if you’re in it for the long run, the initial output isn’t all that important. The best strategy, therefore, is to make your daily task so laughably easy that you can’t help but succeed – a mini habit. So you should forget the 2,000 words and instead aim for 50. Or just give one Dalek a hug instead of trying wrestle a whole squadron of them.

Who couldn’t do that?

Having achieved your 50, you can go on to do however many words you want – 2,000 say – but you must always hit those 50 words. On good days you will obliterate this target. On bad days, maybe you’ll tap them out on your smartphone as your falling asleep. But you’ll have kept the streak going.

He’s got a point. If your goal is to write 2000 words, then writing ‘only’ 1,500 words on any given will make you feel like a failure, despite the fact that this is more than you’d need to write daily to successfully complete NaNoWriMo.

You may feel some internal resistance to this idea.

If you want to become an award-winning rearer of pigeons, for example, then only rearing one pigeon a day (that’s probably not how pigeon-rearing works but hey) is clearly not enough.

But Guise’s argument is that if your aim is to build long-term sustainable habits that fit in with your bigger life goals then your short-term output is unimportant. Also, in reality, once you get going, you’ll rarely just do the minimum, for example rear a solitary pigeon. You’ll push on and rear 20 pigeons. But on the off-days when you only hit the bare minimum, that’s still good news, because you’ve maintained the unbroken chain. Of pigeons.

Indeed the author’s own breakthrough came with a one-pushup-a-day mini habit that propelled him into an effective and long-standing exercise habit.

Basically, whatever habit you want to start, you need to make a miniature version of it:

Want to cycle more?
– Ride half a bicycle.

On reading the book I realised that I was already reaping the benefit of a mini habit without realising it. I’m currently using the excellent Duolingo to learn Polish. It asks you to set a minimum points haul a day, with points coming from completing exercises.

I set my own minimum at a paltry 20 points, which means 2 exercises, which I can rattle off in under 10 minutes. At first I thought it too low, but this humble target has kept me on the track. On good days I’ve hit 250 or so. But on bad days I’ve just done the mandatory 20. On reflection, rather than raising the number I should maybe even lower it.

Either way, I successfully got to the end of the course very recently, and that was no small feat for me, as I’ve struggled to make consistent progress with this language in the past. 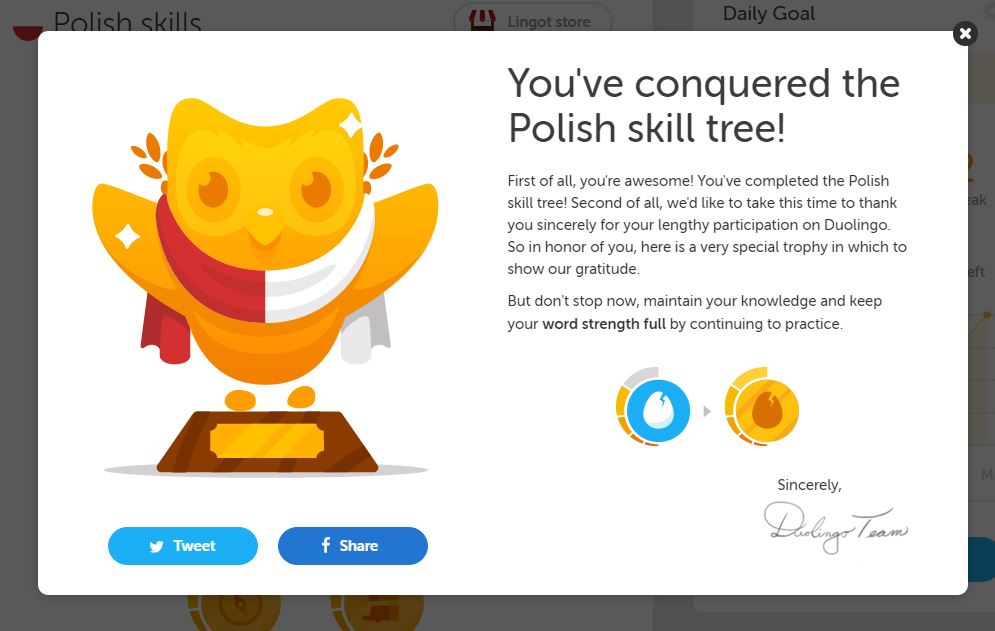 Tellingly, Duolingo won’t let you set more than 50 points a day as your minimum, despite the fact that there must be some pretty hardcore learners out there.

After all, which is better – successfully hitting a minimum of 10 points every day – usually many more – on a habit streak that disappears off over the horizon, or doing 250 a day for twelve days, then ‘failing’ because you only hit 230 one day, and feeling like a piece of shit, giving up on life, losing your job and/or clients, falling into a crack habit and winding up turning five-dollar tricks down at the train station?

There’s more to Duolingo’s adhesive qualities than just that, of course. They’ve gamified the crap out of it, so whenever you make a bit of progress you get a satisfying plinking sound. And Guise talks about the importance of rewarding yourself as you go, too – if you like cats and your desired habit is to stroke more cats then it’s kind of built in, but if your habit is to get healthy by eating more sprouts then maybe you have to tack on some artificial reward.

On a related not, if you do something I approve of and you hear me make a plinking sound, you now know why.

This mini habits idea is not without its failings.

Taking that Duolingo example: regardless of my minimum target, I still feel a bit rubbish when I drop to ‘only’ 20 a day after a week of hitting the high notes of 250 points, despite the fact that I’ve maintained my streak. Indeed, Guise warns against unconsciously changing your goal. But then I do have the consolation of celebrating that streak when the app cheerily reminds me that I’m still on course, which I do every day).

As the author points out, it’s good for making habits, not breaking them.

And it’s not great for short term bursts, either. If you need to wrestle seventy Daleks by Friday, then giving one Dalek a hug for ten seconds every day isn’t going to cut it. But then that’s more of a one off project than an actual habit.

Not a new idea

It’s not a new idea (mini habits, not Dalek-wrestling, although possibly that too). I’ve heard it espoused numerous times before, with various additional details. Here for example. Whilst my friend Karol Gajda wrote this back in 2009.

It also sounds a lot like Jerry Seinfeld’s much-vaunted productivity trick of putting a big red X in his calendar for every day he did some writing, something the author himself picks up on.

Basically everyone knows this already.

But if it’s new to you, or if you just want to know more about it (and to get a kick start towards your new Dalek-wrestling habit), then it’s worth picking up a copy of the book.

What are you own experiences of forming habits and mini habits? How about Dalek wrestling? Do you tend to straight for the tip-over, or do you just throw yourself on top and hang grimly on?

[Main image courtesy of Jim’s Dalek Site. The Daleks © BBC and the estate of Terry Nation.
Doctor Who © BBC. This blog does not condone Dalek-wrestling. Indeed, I for one welcome our new mutant overlords.]