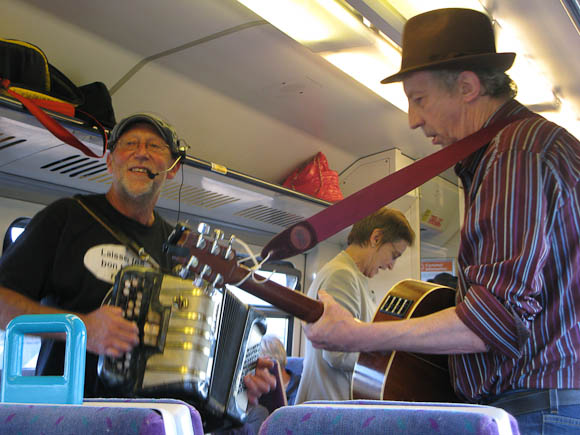 That Time I Took the Folk Train from Manchester

I wrote this post back in 2011 and never published it. But with the folk train still going strong, now seems as good as time as any…

The 18.48 to Hadfield. It doesn’t quite resonate like The Flying Scotsman or The Orient Express, yet this is a special train in its own right. Or so I’ve been told – as I stand there on the platform at Manchester Piccadilly station it looks it looks just like any other suburban commuter train. In fact, I’m beginning to doubt whether I’m in the right place. But then I see a man in a brown fedora with a guitar slung round his neck and I know I’ve got it right.

I’m here for the monthly musical train service from Manchester to Glossop known as the ‘folk train’. Being a regular service, anyone can get on board for just the price of the train ticket, but there are clearly plenty of others here for the music – the moment the doors hiss open, people make a bee-line for the seats nearest where the band will play.

The guitarist is joined in the centre of the carriage by an accordion player and a fiddler, meaning we have a fully operational three-piece hemmed in between the fabric seats and luggage racks. They are a local band called the Bourbon Street Preachers, named after the famous thoroughfare in the French Quarter of New Orleans.

With the journey being a mere half an hour, they have no time to waste. As the train eases out of the station, they get stuck into a cover of Rollin’ In My Sweet Baby’s Arms; a bluegrass number popularised by Buck Owens back in 1971. The lead vocalist sings in tones that are gritty if not quite railway ballast, delivering the now-ironic line about avoiding railway-based work.

As the train sets about exploring South Manchester, the band embark on their own journey through Cajun, Blues and Zydeco via a mixture of covers and their own material. Lead singer and accordionist Dave Eatock will later tell me that he’d really like to do some Fats Domino, but that a piano doesn’t really lend itself to this kind of gig.

The fiddler’s bow see-saws away like a hand-powered rail cart, joined by a thumbed guitar, with accordion smoothed all over the top, the sound being projected down the carriage by battery-powered amps. Percussion is provided by the passengers opening of cans or beer and cider – the aroma wafting gently down the carriage.

Most of those come to watch are in their fifties or older, though there is a smattering of younger folk too and even the odd tourist. Not everyone has ended up in the right carriage, however: one girl, sat amongst passengers who are rocking and tapping in appreciation, is wearing a pair of headphones and a look of grim determination.

At the various stations en route, passengers disembark from other carriages and peer in through the windows as they pass, showing off their best bemused looks. Various folk train services run from both Manchester and its fellow English city of Sheffield, and have been going for the last ten years or so, but they’re not so frequent that everyone is aware of them.

As the train gently surges on out through the commuter belt, modern houses poking out over the top of the tree line, the musicians play on, their weathered instruments at odds with the plastic grab-handles and the fluorescent lighting units. It feels like we should really be slamming along in an old American boxcar.

Finally, we break through into the glorious open countryside of the Peak district. Our ramble amidst the stone houses and rolling hills is short lived, though, as a few minutes later we arrive at the end of the line at Glossop, from where the train will reverse back to Hadfield.

As we head into town in a scattered group, I chat to Dave about performing on the folk train.

“It’s lovely,” he says, “because generally speaking the people who fill the carriage are people who’ve come to listen to the music.”

He explains that the sound can be a bit rough and ready because you don’t do a proper sound-check, but this isn’t much of a problem, apparently.

“Nobody’s too precious about it, either as musicians or as audience – it doesn’t seem to make a lot of difference.”

Soon we’ve arrived at the rather more traditional territory of a local labour club. Here, the band are able to set up in less cramped confines whilst the audience tuck into into hand-drawn local ale and pre-ordered fast food. 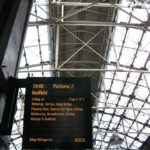 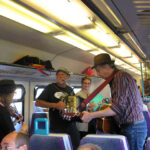 On the folk train to Glossop 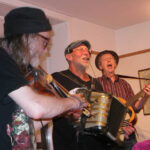 In the pub, Glossop 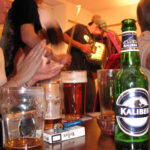 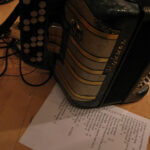 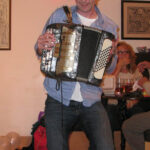 Never trust me with an accordion. Not least because I can’t play the accordion. 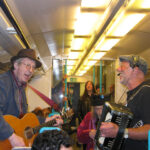 Heading back to Manchester

As Dave and his cohorts lead us through the bouncy zydeco of Jalapena Lena, I talk to Margaret Maynard, whose son organises the Glossop folk trains. She explains that her daughter actually met the man who would become her husband on one of the folk trains.

“He was a commuter going back on the train and we sort of kidnapped him and took him to Edale with us!”

When they married in France, the folk train formed the theme of the wedding, and their friends and relatives even flew regular performer Geoff Higginbottom out there as a surprise (to the couple marrying, that is, not to Geoff).

The final act of the evening is the return trip to Manchester. At Glossop station, three young women dressed up for a night out board the musical carriage. As the vehicle fills, they spot the band, then the expectant audience, and their faces fill with horror.

Everyone else, however, is more than happy to be there. Now well-oiled, the passengers clap along to the music as the ticket inspector squeezes through the ensemble.

The passengers aren’t the only ones to have loosened up since the journey out. “I think they sing better than before,” says a Spanish girl. “I think it is the drink.”

Finally, some three-and-a-half hours after we departed, we’re back at our point of origin. The train pulls back into the masonry and cast-iron columns of Manchester Piccadilly station and everyone disembarks like it’s just a regular, scheduled train service.

Which, of course, it is.

For more information on this folk train and others from Manchester and Sheffield, go to the High Peak and Hope Valley Community Rail Partnership page, where they have a calendar of upcoming gigs.

← My Fraught Relationship with Plants [VIDEO]
Ever Had a False Epiphany? →